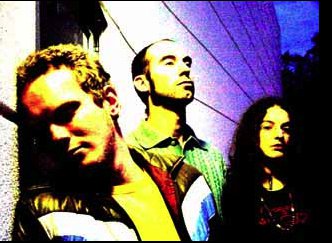 Hailing from Rotorua, Gisborne and Feilding respectively, Luke Hale, Corinna Watts and Carl Watkins joined forces in the middle of the mighty Waikato to create Daisy Chain Halo in 2001.

The seeds of what would later become Daisy Chain Halo were planted when Carl and Corinna met studying music at Whitireia Polytech in Porirua, Wellington in 1998. Later that year Corinna joined Carl, guitarist Adrian Win and drummer Ben Chapman in Porch, performing around Wellington and the middle North Island. Porch disbanded in 1999, with Carl and Corinna continuing to write and perform together as a duo until 2000 when they decided to relocate to Hamilton, naming themselves The Crimson Scene. Former Pushkin drummer BJ Hiha moved from Wellington to join them for a time, as did former Porch drummer Ben, who occupied the drum stool for The Crimson Scene and later DCH several times between 2000 - 2002, including playing with the band in Australia.

In 2001 Daisy Chain Halo won the Waikato Band Experiments, the Waikato Battle of the Bands, and the Waikato regional final of the NZ Battle of the Bands competitions, performing in the national final of the latter in Auckland.
Luke Hale joined after meeting Carl through a social soccer team in 2002, and went on to become their longest serving drummer and much-loved musical soulmate. The three shared a special chemistry as musicians and as friends, which in the end would prove to be irreplaceable after Luke left the band.

DCH enjoyed a well-received debut tour of Melbourne, Australia in 2002, released their EP nationwide to great reviews in 2004, and traversed their first New Zealand-wide tour of both islands the same year in support of its release.

The band received airplay on student radio stations nationwide, on Channel Z and Kiwi FM, and on Radio New Zealand National, with Liz Barry choosing their self-titled Daisy Chain Halo EP among her Top 10 releases of 2004, and Nick Bollinger interviewing the band for The Sampler music show. Hamiltons The Generator FM were also keen supporters of the band, hosting frequent live-to-air performances.
DCH performed live on TVNZ Good Morning show in 2003, and featured on TV3 Nightline programme in 2004.

Along with scores of their own shows up, down and around the country, the trio were fortunate to share bills with luminaries Andrew Fagan, Chris Knox, Fur Patrol, Degrees K, Connan and The Moccasins, and The Checks (when they were youngins).

Daisy Chain Halo ended in late May 2005 but have remained good friends, with all three members continuing on different musical journeys.