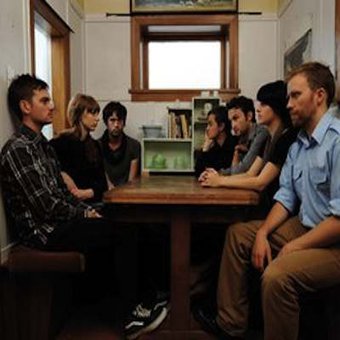 While some might consider Family Cactus as spiky a musical proposition as the group's name suggests, such an obvious interpretation doesn't even skim the surface of the evocative music made by this rather intriguing New Zealand group.

Led by multi-instrumentalist/composer/ singer Adam Ladley, Family Cactus comprises seven members of differing musical pedigrees, a number of different approaches and a variety of contributors, all united by a shared musical purpose on the debut LP, Come Howling. Come Howling was recorded "basically live" over a couple of weeks, the three-guitar, keyboards and rhythm section embellished with additional contributions such as timpani, vibes, and a mini trumpet symphony.

"We are attempting to make music that means something", says Ladley. "With seven members we end up creating music that we wouldn't ordinarily make under normal circumstances in New Zealand. We want to make music that we can play and sing as loud as we want to but at the same time, play music that is dynamically interesting." It isn't simply the tower of sound evoking widescreen vistas engaging the imagination: the co-lead vocals of Adam Ladley and Nina Siegler propel the songs away from vague descriptions like 'cinematic' into story-driven mind-movies.

Ladley, a devotee of the leftfield musical narrative tradition, populates his songwriting with a variety of characters and perspectives: from miners facing tragedy in crumbling coal towns, to bored suburban teenage punks bent on petty destruction. And as the 'New Zealand Gothic' is not exclusively a literary motif, far from couching these tales in the time-honoured, uniformly-downcast troubadour style, Family Cactus sculpt a multi-textured, hook-laden, vividly-imagined musical kaleidoscope where the subjects of Ladley's observational songs burst into life.

But neither the songs nor the group are the domain of chin-strokers. Generating the sort of underground-on-the-brink-of-crossover buzz that their spiritual kin Arcade Fire and Wilco had at similarly pivotal points in their evolutions, Family Cactus have clocked up an alternative radio hit with the exuberant 'Kingmaker', and developed a reputation for their ecstatic live performances on the indie circuit and beyond. Playing spots on the peculiar NZ festival circuit; appearing in parks and museums; opening for like-minded souls such as Okkervil River.

In just two years of existence, Family Cactus have set a course to redefine a particular kind of New Zealand expression: one which will certainly resonate acoss the globe with anybody who cares to listen.