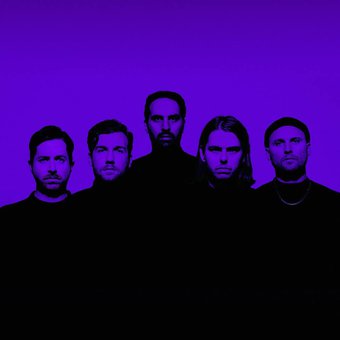 There can be few better reasons to start a band than when the instinctive response to the first song you ever write together is this: "Holy shit, this is awesome."
This was precisely the reaction from LEISURE before, strictly speaking, they were even LEISURE. Back then they were just five friends - names and identities, for the time being, are not important - from New Zealand, each of
whom had been working in different strands of New Zealand's music industry as writers and producers, and each of whom had a yearning to do something a little different, something fresh.

All five had known one another, and admired one another's work, for several years. They would meet regularly, and socialise. They got on, had similar mindsets, and shared the same influences. They liked pop music in all its
guises, but also psychedelia, hip-hop and R&B. They each thought they had something to say, and that, collectively, they might just be able to say it. And so, earlier this year, they took a trip from their native Auckland to Muriwai, an exotic coastal hideaway on the west of the island, to see if they might be able to make music together. "We expected no outcome at all," they say. "The goal was simply to enjoy the time, and attempt to write
some songs."

The attempt proved successful. Seven days later, they had the bones of 13 tracks. One of the 13 was Got It Bad. It was this that had made them respond: "Holy shit, this is awesome." This would hardly be worth reporting if they alone were of this conviction, but they weren't. They put it up online, and very quickly Got It Bad went viral.
People all over the world were hearing the song, loving it, trying to find out more information on its authors, and finding precious little. Suddenly, LEISURE were this "enigmatic" and "mysterious" outfit from the very edge of
the world that had come up with something quietly remarkable. The fuss is understandable. Got It Bad is an unusual song, a minimalist groove with a woozy, soporific rhythm and the most laidback vocal. It comfortably defies easy categorisation. It's post-dub, post-rave. You could call it chill-out, a comedown anthem. It sounds perfect after midnight, or as the soundtrack to a siesta - specifically because you listen to it convinced it was recorded in a hammock, on a beach. All of Ibiza could unwind to it nightly; doctors could prescribe it like medicine. It is as brilliant as it is blissful.
"The response we've had has been incredible," they say. "Really, we had no idea what, if anything, to expect. So it's all been a very pleasant surprise." Duly encouraged, they quickly released another song online. "Hot Love"
exists on a similarly narcotic wavelength - slow motion disco, or dreamy RnB - and so offers ample suggestion that LEISURE sound quite like no one else around. This plays considerably to their benefit.

There is a reason, they say, they have called themselves LEISURE. "It means that we have to have a really good time doing this. We've all been in the industry for years, writing and producing songs for others, but this is our way
to remind ourselves why we got into music for the first place. To express ourselves, and for the sheer love of it."
They are a wildly democratic bunch, all of them playing everything, all of them contributing vocals. "When we come together," says one, "we feel free and open to be who we truly are as musicians and artists. We each bring our
own strengths, and we also complement each other, bringing to bear our own influences: a little 70s funk, some 90s rap and R&B, early 2000s dance. We don't even really know which genre we fit into, we just know we want to make a good groove."

The band have now signed to Saiko Management, responsible for bringing Lorde to international recognition, and are currently putting the finishing touches to their debut album. The project they started in rural splendour at the bottom of the world now looks set to take them global. If their expectations had initially been small, their horizon is now adjusting accordingly.