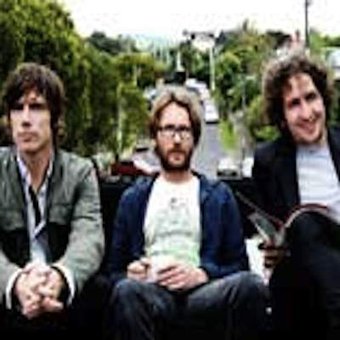 This familiar looking line-up is Nightchoir. A side project that evolved into a band that are now about to unveil their debut album '24 Hours Of Night'. Between them, these guys have been in over 20 bands and have  a startling 60 years experience!

Nightchoir are Mike Hall , Matthias Jordan and Michael Franklin-Browne, who have played together for nearly a decade as the rhythm section for Pluto. Nightchoir's sound differs in temperament  and tone with their songs drawing on the gentler edge of musical genres, including alt-country, indie-pop, and folk.

The trio first got together to work on some of Mike Hall's tracks which were recorded as a series of four track demos . In 2008 Pluto had been promoting and touring their third album and while catching their breath, the Nightchoir project resurfaced. Mike Hall had accumulated more songs and Matthias Jordan also had a batch that he had worked on and developed with help from Michael Franklin-Browne.

Channeling the lilt of David Rawlings, the tempo of Red House Painters in places, and the mood of Band Of Horses, Nightchoir deliver a staggeringly beautiful album. '24 Hours Of Night' refreshingly explores varied song styles but is made coherent with the undertone of a focused vision of friends who know and trust each other's skills implicitly.

Channeling the lilt of David Rawlings, the tempo of Red House Painters in places, and the mood of Band Of Horses, Nightchoir deliver a staggeringly beautiful album.