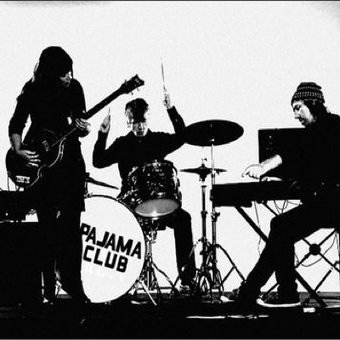 It's always been the element of struggle that makes music human and exciting. Neil and Sharon Finn discovered that for themselves at home late one night in their pajamas, having their first jam, making a racket in the grand tradition of enthusiastic amateurs.

For Neil, after a career of writing songs and strumming guitars, it was liberating to be behind a drumkit, no chords or melody to navigate, just keeping time and making it swing. For Sharon, after raising 2 fine boys and coping with Neil it was just 3 notes, pure feel on the bass guitar.

It's no wonder they both listened back to this music and felt like something exciting and fresh had been revealed. For the next few weeks it became a nightly ritual, a few wines and into the music room, pick up instruments and push record.

And so inspired, Sharon and Neil were compelled to take it further. They invited respected Auckland songwriter and musician Sean Donnelly to lend a hand. The three of them went to work and steadily those jams became songs, a body of work more diverse and dynamic than any of them had imagined.

With the album now complete and due for release mid year the Pajama Club are delighted to be joining Wilco at their Solid Sound festival for their North American debut. More dates will follow.

The Pajama Club on stage are:

Pajama Club - Described as a less atonal Sonic Youth jamming with "Tango In The Night" era Fleetwood Mac, have just released their first self titled Album. Now its off ...