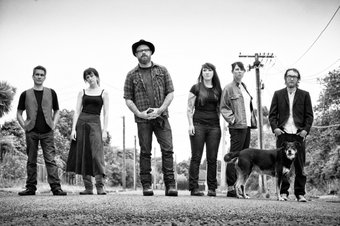 Whether roaring as their big six piece string band or swinging the loud lonesome sound as a two piece and averaging over 200 shows a year, The Eastern can hold it down in all settings for all comers.

Constantly on tour the eastern have played in every nook and corner of the good isles of New Zealand, and have broken strings and dented floors in parts beyond. From Papanui to Portland, Shirley to Sydney they've seen more than their share of barrooms and street corners, but treat any opportunity to hold it down and play as a gift and one they'd be fools to waste. They play like they mean it, like its all they know how do...because they do and it is.

They've toured with Steve Earle, the Old Crow Medicine Show (twice) and the Lilʼ Band of Gold as well as opening for everyone from Fleetwood Mac to the Jayhawks to Jimmy Barnes to Justin Townes Earle as well as Jim White, Victoria Williams and Vic Chestnut.

Over the past five years having delivered up two albums (‘The Eastern' and ‘Arrows'), three e.p.'s and near on 1000 shows, The Eastern have garnered a reputation as NZ's hardest working band. They gather converts and friends and great reviews wherever they or their records land.

Thrillingly the rolling, rambling, shambling, family hoedown atmospheres they project in their live shows have endeared them to the hearts of many. It's obvious they care about the audience as much as the songs. When they're playing it all makes sense the loud songs get louder and the slow ones sadder.

They make friendships and family wherever their songs and stories ring out. The trust they've built between themselves and the folks who come and hear them is something they're rightly proud of and they remain thrilled and amazed it's that relationship that has been able to keep their wheels on the road and their bellies fed, not least the fact that as the years pass the threat of their former day jobs fade back into the ether.

Due to start recording their third album in February 2011 plans were waylaid by the chch earthquake, instead they gathered up friends and singers alike in their home town of Lyttelton (chchʼs port) and begin work on the charity record ʻThe Harbour Unionʼ, ­the album debuted in the top 20 of the NZ Charts and has proved to be a wonderful vehicle through which The Eastern and their friends can trade music for donations to the chch earthquake fund.

This march see's the release across New Zealand and Australia of their third and most realised record yet ‘Hope and Wire'... a double album rolling out at a single album price its loaded with stories, heart and harmony as well as the grand barroom philosophising and old time fury the band have been known for. THe Eastern will essentialy be on the road throwing this record into any hand that'll take it this year, their next day off is sometime in december...

"...you can smell the whiskey and dust on
every song...true to the spirits of Bob Dylan,
Springsteen, Patti smith and Townes van
Zandt"

"the first New Zealand band in a long time to
do things the good old-fashioned way."
- Dominion Post

"The Eastern are possessed of a sound which
is heartfelt, authentic and infinitely
listenable..."- NZ Musician Magazine 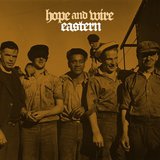 The Eastern return with their third full length album. A double album. Hope And Wire.