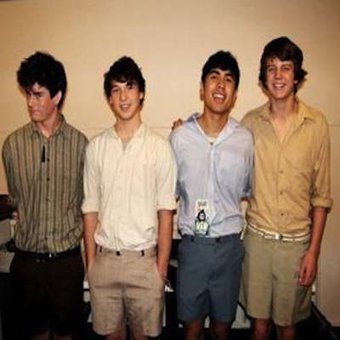 The Good Fun, a “quirky indie pop rock band”, and national winners of the Smokefreerockquest 2010, formed back in the O Nine to have a blat at the Rockquest

Hailing from the NZ Rock capital of Pirongia, it gives them plenty of healthy competition to refine their skills. They claim their highest achievements so far as winning the 2010 Smokefreerockquest, playing at the triumph Motorcycle club meet at the Waitomo motel, The Lowdown Best Song Award, The Schick Style award, Releasing their first EP (EP Phone Home), and another band covering one of their songs!

The Good Fun also double as a covers band for a laugh, so you know whom to call if that’s what you need.

Since winning The Smokefreerockquest title in September the boys have been on a busy road of recording their first single, Naughty Lil Sin, at York Street with award winning producer Andrew Buckton. Filming that singles’ video with Mark Robertson of Max Volt Productions, and a Photo shoot with renowned photographer Mark Barber. Both single and video were funded thanks to a NZ on Air New Recording grant.

December will see the band head to Fiji for a 5 date tour playing shows to over 2000 peps a night as part of the Unleashed Schoolies Tour/Smokefreerockquest.

Already receiving glowing reports, “The Good Fun have a great sound that is very relevant to today’s music market, I can see us playing this band on C4,” said C4’s Matt Barthow, it exciting stuff for a band in the last few days of their own schooling life, watch out for these guys. The future has just begun!