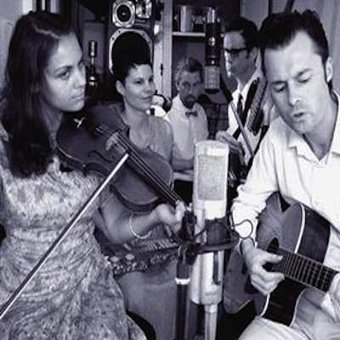 The Nudie Suits first album Songbook was released in 2003 on Lil Chief Records and contained many demos from the previous four years of the bands life span that had been student radio hits.

Since returning to New Zealand from three years abroad in 2004 (perhaps the motivation for writing songs about childhood and home on the Sweetacres album), the Nudie Suits core members Mark Lyons, Dionne Taylor (steel guitar) and Tam Taylor (violin/keyboards) have enjoyed numerous support slots in the past year or two including Cat Power, Jolie Holland, Ken Stringfellow, Calvin Johnson, Wild Billy Childish, The Mountain Goats, The Magic Numbers and Kelley Stoltz. They have also been joined by a new rhythm section Rob Collins (bass) and Ivan Hyphen Johnston (drums).

The Nudie Suits debut album Songbook received excellent reviews Something of tremendous, charm and enormous vitality. - Chris Knox, Real Groove Magazine. The Nudie Suits have strong enough songs to lift them above being just another bunch of too cute irony-singers. Grant Smithies, The Sunday Star Times. exudes the vintage charm and warm glow of an antique valve radio. Russel Baillie The N.Z. Herald. Their sophomore effort Sweetacres proved to be a worthy successor to Songbook with its sublime harmonies, crackling steel guitar solos and phantasmagorical artwork. Not to mention some fantastic songs! The third Nudie Suits album currently in production and due for release in early 2009 expands on the Sweetacres theme of a west Auckland childhood to reveal secret family stories that tell of migration a hundred years ago and continue through the decades to paint a picture of evolving family life in New Zealand. Some new instruments also make their appearance for the third album with Dionne taking up the banjo and Mark the mandolin.

The second album from The Nudie Suits