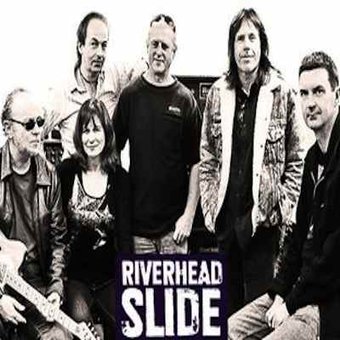 Founder member of Riverhead Slide, Steve is lead singer and a guitarist with a penchant for slide (bottleneck) styles.

Steve uses up to 6 guitars on stage in various tunings - Fender Telecaster and Stratocaster in open G and E, miked-up resonator Dobros in open G and E for slide, Fender Strat and Takamine acoustic in standard tuning.

Solid bassman Murray has been with Riverhead Slide since the very early days replacing original member John Downes on bass.

Living in Thames on the Coromandel, he regularly makes the trek north for rehearsals and gigs.

Murray has played in many Auckland or Coromandel based R&B, country and blues bands.

Gael started performing as vocalist with Riverhead Slide in 2006, making her debut at the Mission Bay Streetfest.

Her addition to the lineup has transformed the sound and feel of the band as well as extending the repertoire. Her choice of edgy and sexy blues and R&B numbers suit her natural blues voice and fit the band style perfectly.

Experienced vocalist, Gael has played in a number of bands, and her voice is well known to late night radio listeners.

UK born Nigel Major is a self-taught guitarist who learned his skills by watching working bands at local gigs. He formed his first rock and roll band at the age of 14, gigging at local pubs.

Later Nigel and his band toured the country for around two years playing clubs & Universities. Highlights include a gig at Covent Garden, a music video in Belfast, live radio shows, Battle of the Bands etc.

Nigel announced his arrival in Auckland at the Team NZ base opening party, performing his much requested "dying fly" guitar solo to the astonishment of guests.

Mike started his musical career with classical piano lessons at age 6. His early training also included pipe organ, trumpet, guitar, violin and flute, and even for a time conducting a full orchestra.

Mike quickly settled on piano and keyboards, and after completing his classical training in his teens branched out into blues and rock music. Mike was particularly inspired by Deep Purple's Jon Lord, another classically trained pianist and organist.

Mike's musical interests have covered a range of genres from the Hawkes Bay gothic punk band Hanging Tree through a variety of rock, blues and country cover bands, to his current gig with Riverhead Slide.

Mike has played guest spots with the Tauranga based Rhythm & Blues band Brilleaux and is a regular member of the North Harbour Rockers Rock'n'Roll band, and country rock outfit Western Union. He enjoys the variety of styles but his first love is playing the blues.

After All These Years