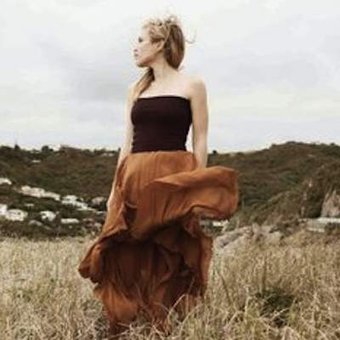 Whether performing solo or as a member of The Woolshed Sessions, Jess Chambers has been capturing hearts all over New Zealand with her award winning songwriting and mesmerising performances.

Last year she was awarded the legendary New Zealand Country Music Award with her hit "Stringing Me Along" and was a finalist for the prestigious APRA Silver Scroll Award for her song "Island".

Jess' live show already has a reputation as an intimate and captivating performance.

New Zealand Musician described her WOMAD performance, "...standing ovations from the audience. A response that alludes towards a very very bright future for this infectiously irrepressible young singer." .

Born to an American mother and Kiwi father, Jess Chambers spent equal time growing up in sunny California and the chilly South Island of New Zealand. Based most recently in Wellington she has firmly establish herself in the local indie music scene, performing nationwide as well as opening shows for international names such as The Fleetfoxes (Seattle), K.T. Tunstall (UK), Sarah Harmer (Can) and NZ's favourite, Bic Runga.

The release of her debut solo album 'Jess Chambers and the Firefly Orchestra' in 2008 garnered her critical acclaim. The NZ Herald gave it 4 out of 5 stars and called it, "Sweet soothing music from a rising local talent...."

Salient Magazine wrote, "A splendidly lyrical and haunting piece of work...there's no denying it's brilliant"

The album has a dreamy quality, it shimmers with melody and lyrical honesty, the layers of strings and lush guitars exquisitely counter-balanced by Taonga Puoro (traditional Maori flute).

The delicate anthem 'Island' was chosen by the NZ Green Party as the soundtrack behind their 2008 election campaign in 2008. Although not overtly political in her song writing, Jess has an acute awareness of our responsibility to the earth and our need to protect and respect our environment.

The roster of musicians and bands Jess Chambers works with and on whose albums her voice can be heard include Rhian Sheehan, Module, and The Upbeats, with remixes by electronica artists Minuit, Antix and Swedish trancers The Phony Orphants.

Her latest and most popular collaboration has been with 'The Woolshed Sessions', a collective that includes some of Wellington's most respected independent musicians and celebrates original New Zealand songwriting.

Their low-fi recordings capture the ambient resonance of the space the music was created in, a refurbished woolshed situated in idyllic Golden Bay, top of the South Island. Their live shows have sold out more than a few times throughout NZ, with Jess playing an integral part of the success, bringing to the project her most up-lifting, almost pop flavoured songs to date.

One of NZ's premier music critics, Nick Bollinger said of Jess' songs, "Hey You and Stringing Me Along have irresistible choruses that belie the heartache lurking in the lyrics."

Currently Jess is busy writing new songs which she plans to perform in a series of shows when she returns to America later this year. Dates will be announced soon.

Desire is an ode to love and to absence, transporting the listener to a hushed and intimate room where stories are told.