Originally a duo with James Kirk (of Sandoz Lab Technicans, The Stumps, The Idle Suite), recently Black Boned Angel has expanded to include Jules Desmond (of 1/3 Octave Band).

Black Boned Angel have released material on Kneale's own labels Battlecruiser and Celebrate Psi Phenomenon, as well as on 20 Buck Spin and Riot Season, and have been compared to artists such as Earth, Sunn O))), and Corrupted. 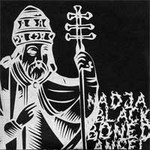