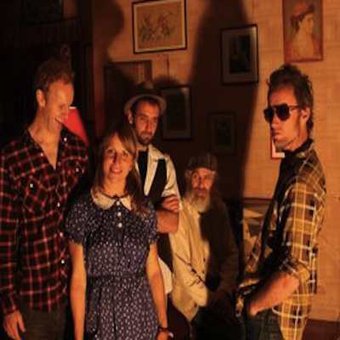 They have been playing live and developing original songs since Jan 2010. The band name was aptly chosen as Lucy is the second youngest of six siblings and spent her youth dressed in retro clothes. The other band members shared the same fate so this was a common trait. They also frequent the recycle centre in Raglan which is notorious for its hand me downs.

After travelling Australasia, Lucy (lyrics/vocals/guitar) had accumulated an album's worth of material, writing songs from the heart about travelling, past loves, losing inhibitions, anguish, desperation, busking, being broke and gypsy queens! By chance she met Raglan musicians Dougal Greer (guitar/banjo) and Dion Chappell (guitar) and from there Hand me downs formed. Dougal and Dion add driving guitar and banjo riffs to Lucy's catchy, quirky and uplifting songs which can be described as honest and punchy. They have since acquired two new band members from Raglan Reg Valente (double bass) and Simon Buxton (drums) They are often joined on stage by Hamilton guest musician Mary Axon (violin)and are now ready to take on NZ!

Lucy gets a great deal of inspiration from the stunning scenery in Raglan which is home to one of the longest left hand surf breaks in the world. In the disposable climate we live in today, the Hand me downs believe in reusing and recycling, especially good music, which should be passed on to generations and generations. Mt Karioi, an iconic feature of the landscape in Raglan, inspired Lucy to write Karioi which is a catchy, uplifting and infectious song. Originally written as a poem, the words easily transformed in to lyrics and were then blended with driving guitar riffs and driving bass lines accompanied by sweet as violin. Once heard, Karioi is very difficult to forget, especially the catchy chorus:

Far and away
she is seen by all
but never heard.
Let the sleeping lady lay
amongst the trees and the birds.

Hand me downs are working on a 5 track EP and Lucy is currently writing more material so keep checking for updates!

Songs so far include:

Narrabeen, Elevator, Kamikaze Kiss, Miser, Karioi, Not far from this, Too young, Turn and face, Over the draft, Raincloud, What happened to my Tuesday, Void and Home is forever away.