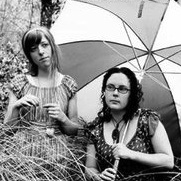 The Ragamuffin Children have been performing their ethereal alt-folk music in New Zealand since late 2006.

Brooke Singer and Anita Clark formed the group whilst they were living in a pirate house and studying music in Wellington. They had been playing occasionally at a small dimly lit venue called Happy, and soon decided they might like to record an album. With the help of some friends, they recorded in kitchens, bedrooms and garden sheds, trying to keep flatmates quiet, and birds from chirping while they recorded. (They failed; the birds can be heard...)

What eventuated was their debut ‘Werecat Lullabies’ released in June 2007.
The album was successfully received, and captured the hearts of many with its unassuming beauty, naivety and charm.

After the release they signed to Native Tongue publishing, and spent time touring up and down the countryside, playing living room concerts,  bigger shows in bigger towns, making a music video and writing new material. During the summer of 2007/08, the young duo had opportunities to play at a number of festivals including the Parihaka Peace Festival, Canaan Downs Festival, Peregrine winery in Queenstown supporting Jose Gonzalez, and at various other events.

After a years hard work they headed off to Europe with the bands newest satellite member Benjamin James (also of Spartacus R) for a small adventure travelling from place to place and meeting many extraordinary and wonderful people, including  marionette puppet makers, a famous music producer, musicians, clowns and a very nice family from Jersey.
They managed to fit in a few shows in Jersey and London before the headed back to New Zealand to record album number two.

Recorded at Wellington studio 'The Surgery' by Lee Prebble with funding from Creative New Zealand, The Seahorse Emporium promises a more mature and professional sound from the Ragamuffin Children.

The album includes instrumentation from some of Wellington's best musicians; A string trio from the Wellington Sinfonia perform upon a number of tracks. Jess Chambers, Rio Hemopo (formally of Trinity Roots) and Andy Hummel (Rosy Tin Teacaddy) provide backing vocals on the single 'Following the leader'. Michael Kane (Drums) and Tim Prebble (Bass), both from Wellington band Spartacus R, also feature. And last, but not least, Karena-Tui Miles-Hemopo (the fourth satellite member of the RMC) was flown especially from Christchurch to grace the album with her soaring backing vocals. 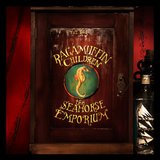 The Seahorse Emporium is the Ragamuffin Children's second album: A collection of curio's, tales of seahorses, storms, snakes and struggles, recorded in November 2008