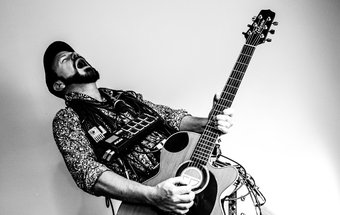 The New Zealand-based Swiss-Kiwi is one of the original one man banders; he has been looping for over ten years and still digs the challenge of building up a song in front of a live audience. He loves to exploit dynamics in a live scenario, stoking the groove with funky bass or beats to really get the audience going.

Sonic Delusion's uniquely upbeat, funky folk is full of irresistible atmospheric joy; even scorching Aussie temperatures of 47 degrees couldn't keep people from dancing! Sonic Delusion kicked off his touring career in 2013 with an epic 9-month, 70-venue tour of New Zealand, and now has over 500 gigs in New Zealand, Australia, Switzerland and Germany, several international festivals under his belt. He's also known for his unorthodox gig venues, having played concerts from a purpose-built stage on the roof of his family's housebus, a shop roof, a lake, and at auctioned gigs in lounges around the country.

When he's not on the road, Sonic Delusion is busy in his adopted home town of New Plymouth, writing and recording albums. He's made three so far, the first of which, +OR- (2012) was welcomed as "a solid debut that will leave listeners intrigued and wanting more" (NZ Musician). The second album, Open Your Eyes (2013), made
good on that, with "a rich, colorful sonic landscape full of funky bass lines, crisp,  jazzy guitar riffs and warm, disarming vocals" (NZ Musician). In 2015, he had just finished recording his thir d album, Without Warning (2015), when the idea of a liquid album came to him - an interpretive beer that would taste like the album in beer form.

He approached a local brewery, who took up the challenge, and audiences drinking and listening to Without Warning got to see, hear, feel and taste the music simultaneously. Not only did the beer win awards, the album Without Warning (2015) made it to #2 in the NZ indie album charts, and was reviewed as "a sensual
delight to the ears for anyone who enjoys folk with something a bit different" (NZ Musician).

This Material World (2017) is the newest album (to be released in April) and, in keeping with Sonic Delusions' signature style, is bright, upbeat, a bit tongue-in-cheek, and bursting with more funk than folk can handle. 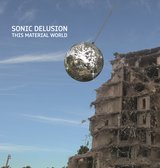