Deceptikonz, New Zealand’s 1 Hip Hop group knows exactly what it takes to reign at the top of their game.

Having collectively sold over 125, 000 albums & singles with 5 gold & 2 platinum records under their belt, including a GOLD record in Australia, Deceptikonz are that rare group that stands out above the rest.

Formed in 1996 on the notorious streets of South Auckland, the explosive group consisting of Savage, Mareko, Alphrisk and Devolo have made a colossal return with their sophomore album “HEAVY ROTATION”.

After spending the best part of the last two years on the road supporting the huge success of Deceptikonz member Savage’s album “Moonshine” in both New Zealand and Australia, Deceptikonz are ready to unleash that uncut raw music that only the energy of all 4 group members can bring to the table.

“Over the last 2 years the group has traveled, had a lot of success and we’ve seen things we never imagined, during that time we’ve worked on our live show, our writing skills, producing, and just about every angle you can think of so that “Heavy Rotation” delivers a new dimension to the Deceptikonz story” States Mareko.

With a proven track record at retail and on radio with 6 top 10 singles between the group and solo members, each track on “Heavy Rotation” has the signature Deceptikonz sound, loud and grimy while still managing to walk the tight rope of staying radio favorites.

“Don’t Front On Me” (produced by Australian beat smith UNKNOWN) is the jump off street single & video that has the internet going nuts and is a favourite on youtube.com.

While Deceptikonz represent their South Auckland home on the Mareko produced “Southside”, the crew take a more universal theme on the Adeaze assisted first single “Listen To The Music” produced by local duo MOS, which asks the introspective question, “do you think they feel our music?” Keeping the album consistent throughout Deceptikonz make explosive impact on club bangers “Bomb In The Building” and “Strut” and bring back that old New York boom bap with “Get Out” and “Put Em Up”. It’s no secret that to have a complete package you need to cater to the ladies and Deceptikonz know how to deliver with new SRC/Universal international R&B star Majic Massey on the Emile produced hit “It’s Alright”.To draw the album to an intense close Deceptikonz finish with an open letter to Hip Hop music, “Dear Hip Hop” is a clever piece of songwriting that asks the much debated topic, “what’s changed in Hip Hop Music?” 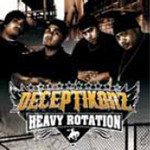 Savage, Mareko, Alphrisk and Devolo have made a colossal return with Heavy Rotation, their follow up to platinum selling Elimination. The album has been mixed in New York by Cochise, ...