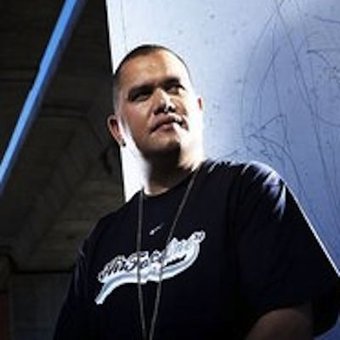 Sir-Vere is a hip hop pioneer. He has always been at the forefront of the movement, learning the secrets and tricks of people like Grandmaster Flash, Jam Master Jay and DJ Premier from their records, accumulating knowledge of what makes a good and popular sound. Gradually training himself how to use the turntables and how to move a crowd through mixing, when he was ready he just seemed to explode with talent and the ability to entertain.

Record spinning runs in the family, his father ran mobile discos and the young Sir-Vere helped out whenever he got the chance, this early baptism into the world of using records as a tool, stood him well as his own hip hop career took off. For he knew that it was more than just sounds, that it was an important cultural development with opportunities to expand upon. In a way he became an ambassador of the growing culture, moving from live work to the world of radio, with his first radio show called The True School show on B.F.M. starting in 1993 and gained its strong reputation due to its exciting mix of tunes which led to the popular television version and then to the Wreckognise show on M.T.V. Sir-Veres journey now sees him as the host of the Major Flavour on national radio station Mai FM.

He has also become a TV personality in his own right as the host of the Holla Hour on C4. What is important about all these media appearances is the promotion Sir-Vere gave to hip hop in general and in particular to local acts, presenting them in conjunction with international acts showed that Aotearoa had its own hip hop voice, different from America but just as vital and interesting.

As well as his TV and numerous djing commitments, nowadays youll find Sir-Vere at his College Hill office in Auckland as the editor of NZs dedicated Hip Hop magazine, Back2Basics. His hugely successful Major Flavours compilations are now in their sixth instalment in New Zealand, and with the his first Australian release of Major Flavours Vol 1 setting off in July 2006, Australian mixtape fans will be introduced to an album that features New Zealand acts, local artists and is packed with free-styles from our best artists mixed with big international hits and the local hip hop dialect all swirled together.

All of the previous Major Flavours albums have sold in excessive units in New Zealand , the first hitting gold, the second reaching platinum, the third also going Gold, and Volume 4 and 5 selling in excess of Double Platinum.

Sir-Vere also has a busy touring schedule, taking the Major Flavours road show around the country to great response, which will include an Australian tour with the July release of Major Flavours 1 in 2006. As an in-demand club DJ, a Sir-Vere set can pull in numbers from 80 to 2000 strong, whether it be a hot nightspot or The Big Day Out in the Boiler Room.

Sir-vere knows how to select tracks that are both popular and new enough to educate, entertain and leave the crowd wanting more. Alongside hype man MZRE, Sir-Veres DJ style if effortless, sharp and original, which the use of Serato Scratch Live DJ software together with two turntables and a mic, this is one DJ who remains on point throughout his fast paced sets.

Similar to a beat practitioner, Sir-Vere transforms one record into another, changing the beats and re-working sounds by scratching or juggling between a myriad of beats and vocals.

Following in the footsteps of the legendary Hip Hop heavyweight Russell Simmons of Def Jam fame, DJ Sir-Vere is also one of the original masterminds behind The Aotearoa Hip Hop Summit, which is now entering it's seventh year, and has firmly established itself as the largest, most respected, and most successful event on the local hip hop calendar. Held annually in central Auckland as an all-ages event, and running over the course of two days, the Summit attracts an ever increasing audience from throughout the country.

Making his move across the Pacific to introduce his brand of DJ/ Entreaupenurial take-over to Australia highlights more than the release of another mixtape compilation into a market always eager for new and different. It is long overdue for Sir-Veres assault on the Australian hip hop scene, but one he has been patiently biding his time for until now.

DJ Sir-Vere is not only about the craft of a hip hop DJ but will set out to share not only his love of hip hop but his passion, knowledge and understanding of the music genre as a movement, a corporate business and a culture. Whilst he is a household name in his native Auckland, Australia will not be too far behind in appreciating the style, knowledge, music and passion that DJ Sir-Vere envelopes himself in. All or Nothing!