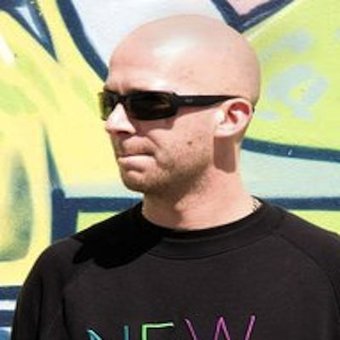 From humble beginnings Ghost learnt his trade on his dad's W30 sampling keyboard and Cubase making beats and mixtapes.

Ghost made his debut on wax in 2003 with the ‘Ghost Stories‘ EP, since then Ghost has clocked up 10 international release's on vinyl or CD. See discography for more details. Ghost has received critical acclaim, strong sales and support from the likes of Zane Lowe, Mr. Scruff, Gilles Peterson, Sarah Love, and a host of international DJ's across the globe. Not to mention support from magazines and blogs from New Zealand, to Tokyo, San Francisco all the way back to London.

Ghost was runner up in the Glastonbury Unsigned Talent contest in 2007 and had a track featured on the Glastonbury compilation CD for that year. Since 2007 Ghost has been touring and DJ'ing all over the UK and Europe (including stints at Glastonbury, Hip Hop Kemp, The Big Chill, Bestival and The Jazz Cafe). He's also found time to work on a number of different projects including Lingua Franca and Invisible Inc (Synth/Electronic Hip Hop with Kashmere and Verb T).

Since the release of his debut album Ghost has had his music licensed all over the world, alternate versions of both his albums have been released in Japan. Ghost tunes have been included on many a mix CD and compilation (most lately on DJ Yoda's Fabric Mix). Ghost has handpicked a number of remixes to help build his reputation as a go too guy, his remix of "Soul Investigators Theme" from the seminal Nicole Willis album "Keep Reachin' Up" and Soul Rock outfit ‘The Heavy' on counter/Ninja Tune, cementing that reputation.

Currently enjoying life in New Zealand, Ghost decided to have a change of scenery in 2009, moving from London to NZ has re-focused and energized a workaholic. With much more headspace Ghost has been busy finishing his 3rd Album ‘Postcards from the Edge' set for release in August 2010. Not content with a new solo album Ghost has already released an exclusive remix project, ‘Remixes from the Edge', available for free download from his website. If that wasn't enough a collaborative project ‘Invisible Inc - The Exit Strategy' with long time cohorts Verb T and Kashmere, has just been released through Ghost's own label, Musicforheads.

Add to this already impressive CV that Ghost is currently Program Director at radio station RDU in Christchurch, and hosts his ‘Friday Drive Radio Show' on RDU 98.5fm www.rdu.org.nz every Friday 4-7 pm, you get a picture that Ghost quietly goes about his business of getting the job done.

The radio show focuses on a strictly good music policy across the Hip Hop, Dubstep, and Electronic Beats spectrum. Learning his trade in the pirate radio scene in London with a 5 year stint on the legendary itch fm, Ghost brings the same cheekiness and cutting edge music to his radio show. Starting out focusing on new music, the last hour of the show pumps up the volume into a taste of what you're likely to hear from a Ghost DJ set.