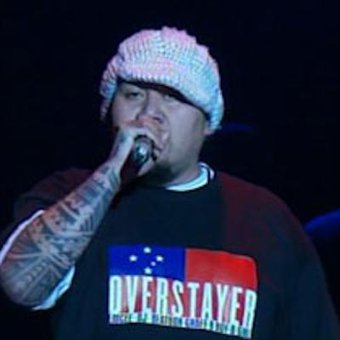 A landmark figure in the NZ hip-hop scene since its origins, Feelstyle (aka Picasso or Kas) has had several names and personas over the years but has maintained a rep that gets respect like no other.

Born in Samoa but primarily brought up in NZ, Feelstyle's name initially appears in the history books following his participation in Aotearoa's first ever MC battle, 'Taita'. Through the 1987 event is most notorious for the emergence of the Upper Hutt Posse to the general public (after a fierce performance they took away the runners up-spot) it's not so well known that the winner on that day was none other than Feelstyle, working at that tiime under the name RIQ.

In these pioneering days of local hip-hop everything was in short supply and RIQ soon found himself sharing a turntable technician, DJ Vinnie aka Viane, with local crew Noise in Effect. Before long RIQ had become a part of Noise in Effect (RIQ, Kosmo & DJ Vinnie) who later changed their name to Rough Opinion and went on to become the most influential and important group in the Wellington underground. Though they never committed their incendiary rhymes and Teflon tough beats to wax, Rough Opinion did tour the country several times, including a support tour with Supergroove (when Che Fu was still on the mic) as well as several performances for charity causes.

By 1995 he was now known as Conscious Navigator and was furthering his rep as a solo artist alongside Gifted & Brown and Ruamoko on a performace showcase called 'Tribal Bass'. With long-time friends DJ Raw and King Kapisi he formed The Overstayers, who recorded demos with DJ Mu from Fat Freddy's Drop and could have been NZ's first hip-hop supergroup had history not turned out differently. Around this time Kas also started hanging out with South Auckland rapper Ermehn whos track 'Walls Of Steel' benefited from his chorus writing skills as well as premiering Kas rhyming in Samoan on record for the first time on the intro. His focus was moving beyond Wellington's passionate and compact hip-hop scene. It was also in this period that Kas first met up with emerging producer Submariner aka Andy Morton who was quick to realise the potential of his unique rhymestyle, delivery and perspective Kas was among the first to be signed up to the brand new Papa Pacific label and released a single 'Hibiscus Milk' that won props for its NZOA assisted video but never got the support required to capitalise on his freshness.

Having built up a serious head of steam it was time for another name change and around 1997 Conscious Navigator became Field Style Orator. Under the banner Phunk Republic, Kas toured the country with Dam Native and his compardres Kosmo, DJ Raw and Fiso wh owere by this stage establishing the name The Footsouljahs. Asked by Mo Show's Slave to contribute a track to the seminal 'Aotearoa Hip-Hop' compilation Kas called in DJ Raw and came up with 'Tha Anthem', which was a solid statement of solo intent and an epiphany of musical purpose. Realising that with his bi-lingual English/Samoan rap style he could pull people in who might otherwise be resistant by injecting some humour and good vibes into proceedings, Kas was set for the next stage of his career.

Moving up to Auckland to assist King Kapisi with his debut album, Kas's writing and vocalising is felt on several of the tracks including 'Screems From Da Old Plantation' and 'Second Migration'. Becoming increasingly in-demand as a studio guest artist as well as a live rapper, he appeared on the remix of Ardijah's 'Way Around You' with Manuel Bundy, Submariner and Mark De Clive-Lowe. As well as concocting the scorching 'Coconut Sauce' track with Juse, which eventually wound up on the 'Major Flavours' compilation series.

The remaining years have seen Kas become simply, Feelstyle, and the focus has been his partnership with production sensei Submariner and the endless hours spent ensuring that 'Break It To Pieces' is all that it possibly could be. In the meantime Kas's currency has continued to increase in value with highly prized guest shots on solo tracks and remixes for Bic Runga, Soane, Che Fu, Manuel Bundy and House Of Downtown. 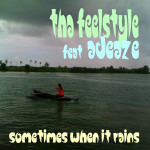 Sometimes When It Rains Feat. Adeaze.

Tha Feelstyle is back with his new single Sometimes When It Rains. And he's got Adeaze helping to make things smooth. &nbsp;