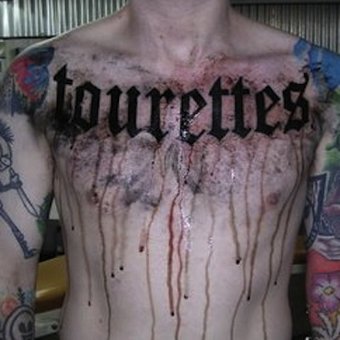 Hi I’m Tourettes, I like rapping, poetry and playing the drums. I write about politics, love and diseases.

This year in effort to impress a wider audience than my dear old mum I have...

. Released my critically acclaimed album "Who Said You Can't Dance To Misery"
.The first single "Almost Out Of Water" feat Anna Coddington went to number one on NZ Radioscope Alternative Charts and spent 7 weeks in the top five.
. Made a video for the second single off the album "Letting Go" with director Rob George
. The new album has received rave reviews including 5 stars in Real Groove Magazine, 4 stars in the NZ Herald and Album of the week on Christchurch B-Net RDU, Kiwi FM and in the Groove Guide.

"Who Said You Can't Dance To Misery? is posturing and powerful but without the faux bravado of most hip-hop" Scott Kara- NZ Herald

"Maybe the best thing about the song (Letting Go), and the album it comes from is that it's all his own sweat and determination. I personally can't imagine a better record coming out of New Zealand this year" Duncan Grieve- Editor Real Groove Magazine

"Great album of involving songs, this is my early pick of the year" Kerry Buchanan- Real Groove

Its been 2 years coming but the wait is finally over. Introducing Tiger Belly, produced by Karl Steven (Supergroove, Drab Doo Riffs) and music by Saan Barratt (The Vietnam War)