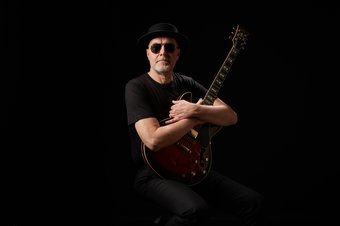 Maciek was born and grew up in Kraków, Poland, during communist times. During his teenage years, he played with several known Polish pop and jazz bands toured with (the then famous) Jacek Lech.

Maciek emigrated to London, UK in 1975. He mixed with musicians of all genres, which influenced and developed his personal guitar style over time. He played toured and recorded with bands such as the Warm Jets, Electric Eels, Eastern Alliance and other London punk and new wave bands. From the mid 1980s he worked as an in-demand session guitarist as well as a composer for TV commercials and TV music.

In 1986 he started a songwriting and production collaboration with jazz singer Carol Grimes that resulted in four successful albums. All of which were toured regularly in the UK and Europe.

Maciek also played with ‘John Bennett Band’, an 18-piece modern jazz ensemble and recorded an album which played Ronnie Scotts, Jazz Cafe, the Vortex and Pizza On The Park in London.

In the early 00s, Maciek with his friends, Winston Marche – drums, Gareth Morgan – bass and Andrew Blake – woodwind, formed the quartet Gdansky Bandsky – which performed in jazz venues around London.

In 2014 Maciek moved to New Zealand where he lives with his wife. Maciek performs in Hamilton and around Aotearoa. His guitar playing was characterised by Waikato Times, 23rd Feb 2015, Sam Edwards as: “…delivering a virtuoso and musically informed lesson in guitar”. He also composes, produces and records his own and other artist’s music. In 2018-19 he produced three albums for a prolific Kiwi gospel artist Nicky Moran. He also teaches guitar to aspiring young guitarists, as well as giving masterclasses to advanced musicians in need of inspiration.

In 2018 Maciek began working on his first solo album inspired by the natural beauty of Aotearoa New Zealand. The initial recordings took place in the Porch Recording Studio in Hamilton and featured an international cast of Aotearoa-resident musicians. The album features British, Polish and Maōri musicians. The album AWA was released in December 2019.

Maciek is currently working on his second solo album and collaborating on a number of projects with other Kiwi artists and on projects with Polish musicians. 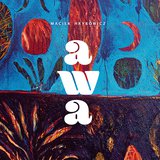 Maciek&rsquo;s album AWA was released in October 2019 and is inspired by the unequalled natural beauty of Aotearoa New Zealand and its indigenous Maōri culture.