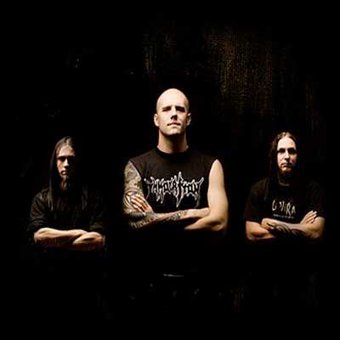 Undoubtably the leaders in taking New Zealand metal to the world, the country's foremost extreme metal band Dawn of Azazel are set to raise the bar both here and abroad with their brutal, violent and invovative second album "Sedition"

Dawn of Azazel formed in 1999. The band quickly began to make a name for themselves with relentless live shows through out New Zealand and Australia and the release of two demos that garnered their first international release in 2002, the Bloodforged Abducation 7" through Italian Label Hellflame records. This out of the limited 500 pressing on presales alone.The release attracted a myriad of offers from Underground metal labels world wide, and their first international tour supports.

In November of 2003 Dawn of Azazel released their Debut album "The Law of the Strong" though Agonia records in Poland. Featuring 8 metal classics mixing blistering speed, raw brutality and total darkness, that had been refined to perfection over the 6 years of their existence.

The band worked long and hard to promote this locally and with the help of the contacts they had made over the past years their efforts were rewarded. Despite being a raw, uncompromising extreme metal release the album went on to break out from the metal underground receive high praise in local mainstream music press, radio and television. This was accompanied by acclaim by the worldwide metal underground as well as features and interviews in leading worldwide metal publications such as Terrorizer and Metal Maniacs.

Dawn of Azazel then hit the road to promote the new album. An extensive New Zealand tour was followed by their first major international tour throught Europe, playing their first shows in Germany, France, Austria, Switzerland, Holland and Belgium. The band then continued their inexorable advance by again touring Australia. Upon returning from this tour a mutual decision was reached that Tony and Phill should leave the band as they were unable to commit sufficient time to the bands schedule. The decision was made to continue as a 3 piece and drummer Martin Cavanagh was quickly recruited to replace Phill in the first days of 2005.

This line up immediately began intense rehersals, and them embarked on a 13 date New Zealand tour. Immediately upon returning the band entered Kog studios to record their second album, "Sedition" This album bore the fruits of a years hard work and marked a massive step up in the musicanship and profesionalism of Dawn of Azazel After spending the next few weeks completing the album the band was invited to play one of the headlining slots at Australia's Premiere extreme metal festival, Bloodlust. The band signed with Ibex Moon records shortly after for the release of Sedition.

Again the band re-doubled their efforts and played more than 120 shows to promote Sedition. 2006 saw the band undertake an extensive 13 date tour through New Zealand, Australia, Thailand and Indonesia with Disgorge. The bands next step was playing to 6000 opening for Korn on their only New Zealand show in May, continued later that month by 24 shows on their first US tour With Vital Remains and Incantation. Following this the band again hit the road in December as headline support for Deicide throughout their sold out tour of New Zealand and Australia.

In 2007 The band continued their inexorable advance with an appearance at Australia's Overcranked festival, followed by the longest tour ever undertaken by a New Zealand based band, 32 shows through Germany, France, The Netherlands, England, Ireland, Scotland, Belgium, Austria, Spain, Portugal. Denmark, Switzerland and the Czech Republic in Support of Immolation, Krisiun and Grave. This was followed by support for Motorhead at home and touring again with Behemoth throughout Australasia.

2008 saw the band part ways with Martin, and Jeremy Suckling step up to fill the drummers stool. March saw their live debut supporting Kataklysm in Australia, and Children of Bodom in New Zealand. 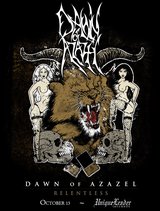