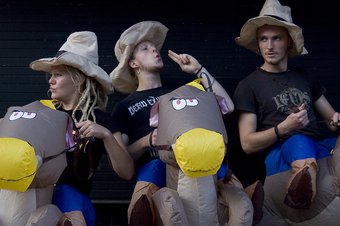 “Yes, our name is stupid, and no, we don’t care. A band name is a just a brand name like Cadburys or McDonalds. Our name neither effects nor reflects the music we play. It is unimportant to us.” So states guitarist/vocalist Leah Hinton.

Hinton formed El Schlong in Dunedin, New Zealand in 2003 along with fellow music student Nick Baldwin on bass. They cut their teeth and learned their craft in the city's DIY student punk/metal scene before moving to the country's capital in 2005.

Wellington saw a change in style that moved from quirky and upbeat to more heavy and complex. It also resulted in the importing of their current drummer Jordan Tredray, and the departure of their original vocalist. Faced with the impending recording of their debut album and a huge relocation across the globe to London, the three members of El Schlong decided to begin vocal duties themselves.

"The Baddies Are Coming" was recorded in April 2008 and has received very good reviews worldwide. The album sprawls across the musical spectrum, moving from metal to weird, and all things in between. It is like Satan in the bath puzzled by the ginger pube on the soap......... The fully animated video clip for the title track won second place in the Handle the Jandle music video awards in 2010.

El Schlong moved to London in August 2008 where they forged a place for themselves in the underground scene. Here they honed their skills as a live band and developed the loop pedals and vocal layering that is a feature of their live show.

In August 2010 they packed their bags and set off for the Southern Hemisphere. "Time/Place" was recorded in August 2010 while in New Zealand, and was released in May 2011. A snapshot of their two years in London, the album expels a darker and slightly foreboding mood and further explores the band's fascination with dynamic movement.

In 2011 El Schlong completed the next step in their "Slowest World Tour Ever" by relocating to Berlin, Germany. From Berlin they have toured extensively, playing 31 cities around Europe and the UK and bringing their touring total up to 47 cities around the world.

So what genre of music do they play? Maybe avant-garde metal best describes it, but you really need to listen for yourself. And the name? Love it or hate it you will never forget El Schlong................. 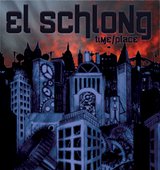 Written during their two years in London and recorded in New Zealand, "Time/Place" is an introspective story of human&nbsp; existence in a teeming modern city.