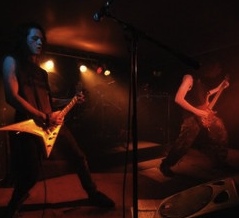 Heavy riffs, wailing solo's, thundering bass and heart pounding drums are what you can expect when you watch Horusset live. The bands high energy stage show has earnt them a reputation as one of the most explosive live acts in the country.

The members joined together in a previous band called Midnight Metal Symphon in 2008, and were already touring around NZ when 2 of the 5 members left. In 2009, influenced by Rock; Metal legends such as Pantera, Megadeth, Skid Row, Alice in Chains, the remaining 3 members refined the musical direction of the band and changed the name to Horusset.

With the old singer leaving, Charlie Wallace, the bands Guitarist and Song-Writer, had to step up to the plate and become the Vocalist as well. With Jevon Quirk (Bass) and Matt Hughes (Drums) the 3 piece quickly found their feet and immediately began playing shows around the country, sharing the stage with some of NZ's top names in music.

In November 2010 the band entered and won the City Showcase New Zealand Festival beating out some of NZ's music heavyweights. This gave them plane tickets to fly half way around the world and saw them touring Europe in 2012.

The band recorded their first official release in mid-2011 in the form of a 3-track EP, and celebrated the release by touring their home country once again. The songs are regularly played on The Axe Attack on NZ's top Rock Radio Station The Rock FM.

'Complete with thick guitar arrangements, tight punchy bass
and drums that sound as though they're knocking on
hell's trapdoor, these three are intent on blasting
your eardrums to pieces with their time honoured
mash up of hard rock and metal...
...There's plenty to indicate that
Horusset has the goods to go the distance.
Polished, precise, passionate and with plenty of punch.'
- John Paul Carroll, NZ Musician

Soon you will be hearing a brand new CD and watching them head out on tour before heading back over to Europe. 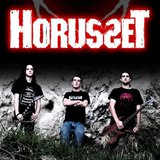