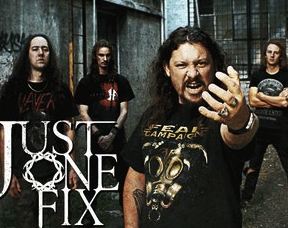 Just One Fix are an Auckland based four piece metal band, who were formed in late 1999.

Since then they have been fortunate enough to play with international titans Megadeth, Hellyeah, Korn, Chimaira, Biohazard, along with local heavyweights.

After Stuntcock's super sperm knocked up an unsuspecting G Force, Martin Kemble (who played for the Fix during their album release tour) and Lee Steele were recruited for drum and bass guitar duties as Ant and G focused on their family life.

This new line up have been the first NZ metal band to play Vector Arena, have performed at 2008s Mammoth Metal Fest, 2009s Big Day Out, numerous HMHR Metal Fests and went into the studio to record their second album, Blood Horizon.

The different influences of the individual members of Just One Fix have led to the band developing a tighter, harder and more aggressive sound on the album. This was honed by the production skills and advice of Zorran Mendonsa (Saving Grace, In Dread Response, Subtract, and Cobra Kahn) with the final coat of metal applied by studio mastering genius Evan Short (Shapeshifter). 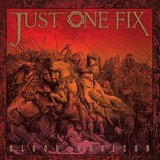 These songs were honed by the production skills of Zorran Mendonsa (Saving Grace, In Dread Response, Subtract, Cobra Kahn) and had the final metal coat applied by studio mastering genius ...