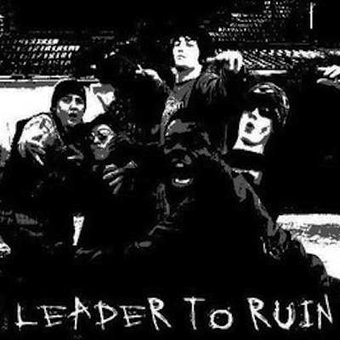 Leader to Ruin were formed from the ashes of two dying rival bands in 2003.

Rory and Justin would meet secretly - unknown to the members of their respective bands - to join forces and engineer something greater than the sum of the two bands. What they came up with was a Frankenstein monster of the favourite genres of their assembled lineup - blending elements of hardcore, industrial and death metal. They set forth with an amalgamation of their main influences - including Fear Factory, Tool, Lamb of God, Meshuggah and The Black Dahlia Murder - to unleash a unique style of aggressive music that has appeal among not only fans of metal but those of various other alternative genres. Leader to Ruin's lyrical content is a sardonic pastiche of taboo and inappropriate subject matter. Facetious and excessively offensive, they are intended to draw response of indignant outrage in order to expose the horrors, contradictions and even the absurdity of the things in life that we would rather ignore.

Being seasoned frequenters of shows themselves, their music is designed specifically to best facilitate the moshing efforts of their audience. They attack you with a brutally unrelenting intensity that refuses to let you regain your composure even for a moment. Their dizzying overlapping rhythms and sudden dynamic shifts will generally cause you instead to degenerate into a frenzy so severe, that it will cause even the most timid person to decide that they will dominate the pit. Having played alongside the likes of 8 Foot Sativa, Parkway Drive, Cold By Winter, Antagonist, The Bleeders, and veteran heroes of the Auckland Hardcore scene - Volume Gold, Leader to Ruin are the class clowns of Auckland's Hardcore and Metal scene - notorious amongst frequenters of Auckland shows for their entertaining act. The personalities and attitudes of the band members combine to collectively stick it to anyone who has the audacity to turn up to one of their shows expecting to be allowed to stand at the back of the room with their arms crossed. All inhibitions go out the window when this band takes the stage, so everyone is expected to act accordingly. Anyone found to be taking themselves too seriously will fall victim to a barrage of abuse from frontman Nick and if that fails to stir people into action, then Junior and Rory are on standby to depart the stage and apply more draconian measures among the audience - as they continue to play - in order to achieve this.

Come, let the warm, moist sound of this finely tuned machine sooth your loins and complete what had, until you experienced Leader to Ruin, been worthless, unfulfilling lives. For then when your grand-children ask if you ever saw the mighty Leader to Ruin, you may get a wee bit emotional, you may even shed a tear, but you will be able to say with great honour and pride... "Yes... Yes I have!