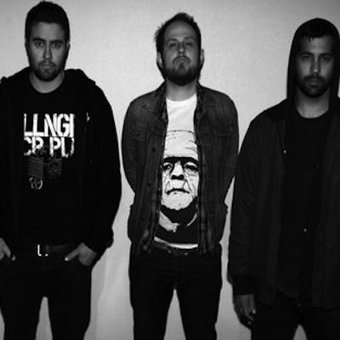 The origin of Lord Of Tigers can be traced from inebriated conversations about mutual influences at some late-night venue, as one might typically expect...

Credit must instead be given to the Electro-Harmonix corporation for producing an effects pedal christened "POG" (polyphonic octave generator). Guitar player/vocalist Ryan Thomas (Sommerset, Luger Boa) was so taken with
the POG and its ability to produce a truly disgusting guitar sound (imagine a very, very troubled Hammond organ) that he was inspired to form a band for the almost sole purpose of being able to use this sound at high volume.

Enter drummer Anthony Davies (The WBC, Seven Suns), a polite young man with an appreciation for heavy music who had inadvertently wound up playing in a ska band. The early Lord Of Tigers jam sessions produced songs that sat somewhere in the middle of a three-way bridge between Converge's "Plagues", The White Stripe's "Blue Orchid" and Motorhead's "Ace Of Spades".

After a few of these sessions it became apparent to the pair that, while for all intents and purposes Ryan's guitar sound did an admirable job at filling the low-frequency void, they would benefit from the inclusion of a bass
player. They knew that Milon Williams (Cobra Khan, Sommerset) had recently purchased a Rickenbacker bass. They proposed to him that the only thing better than owning said bass would be to use it. Overwhelmed by such
indefatigable logic, Milon seceded and joined the band, contributing both a truly vile bass sound and a second set of lungs, facilitating Lord Of Tigers' two-pronged vocal attack.

In a short space of time of time the band made many a notch on the gig bedpost, supporting the likes of internationals such Poison The Well, Brant Bjork and The Bros, Monarch, as well as local heavy favourites such as
Subtract, Dawn Of Azazel and diverse others. Audience member feedback has varied from "New Zealand's version of High On Fire" and "vocals reminded me of Neurosis" to "my ears could only take three songs" and "you guys were so loud I think I saw through time".