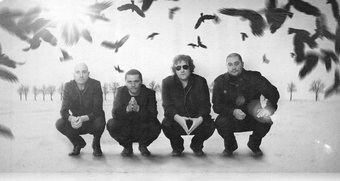 Over the past seven years, Auckland based four-piece OPSHOP has become one of New Zealand's best-loved bands, crafting a constant stream of massive hits and two multi platinum-selling albums, You Are Here and Second Hand Planet.

Now OPSHOP has returned, releasing Pins & Needles, their first single in over a year and proving time together has done nothing but enhance the band's ability at the song writing desk, and in the recording booth.

It seems an age now since OPSHOP found mainstream fame with singles such as No Ordinary Thing, Secrets, Levitate, and Saturated, all popular singles from the You Are Here Album, released in 2004.

However, those songs certainly hit the airwaves and lodged themselves firmly in New Zealand's musical lexicon, providing the critical and commercial acclaim required to keep the band on target for a lengthy career at the top of the New Zealand charts.

Of course, it wasn't without its moments of doubt! The band's relentless touring and publicity schedule following the release of You Are Here led to some inevitable personnel changes (the current line-up has been together since 2005) and lead singer Jason Kerrison was determined to keep the album production closer to the band.

"I had felt somewhat isolated from the process with the production and mixing of our debut based in the States," he says.

If You Are Here was the net result of schoolboy ambition (Kerrison and Treacy first became musically acquainted at Christchurch's St Bedes College) Second Hand Planet would be the fulfilment of the band's desire to work with the best, and to be omnipresent during the recording and production process.

Cue Greg Haver, producer for the Manic Street Preachers, Super Furry Animals, Lost Prophets, Tom Jones and a host of other British stars. He wanted to work with OPSHOP. They couldn't see a problem with that.

The problems would come soon enough though.

"We had pre-produced around 10 of the 14 songs slated for Second Hand Planet and we realised that all these songs had been written at different times, for different reasons, and that there was absolutely no cohesion to the album," says Jason.

"Greg was about to head away with the Manic Street Preachers and we had three weeks to find our collective voice, re-work our material, and in some cases, start from scratch. It was a hell of a time!"

Hell of a time perhaps, but the result was one of those rare nuggets of sonic genius that catapult a band from interesting to iconic.

Second Hand Planet did not so much explode onto the charts and burn from the inside out, rather it hit number one in its 32nd week, distributing along the way some of the most recognisable songs of the last decade.

Maybe (New Zealand's most played single in 2007), Waiting Now and Big Energy in Little Spaces all received widespread critical and commercial success, but it was the achingly familiar One Day (feat. Dianne Swann) that stole the show and led Second Hand Planet to triple platinum sales.

"The way I write songs means they don't have to make immediate sense," says Jason.

"At an emotional level, though, they hit where they hit. It's non-linear - it just works where it works."

One Day certainly worked, picking up a host of industry awards along the way, including the 2008 APRA Silver Scroll for Song of the Year, arguably the highest accolade awarded for song writing in New Zealand.

The success of Second Hand Planet allowed the band to enjoy what they consider a ‘slight sabbatical', but that only means finding time to write another album (to be released in New Zealand on August 2) and working alongside some familiar faces.

"We went back to Greg Haver and Engineer Clint Murphy for our third album because we thought they had done such a great job with the last one," deadpans Jason.

"Seriously though, we have pushed the boat out on this one and have brought in a lot of experimentation while staying true to the way we like to write and perform!"

If all the results of that experimentation are half as good as the first single, Pins & Needles, then fans of OPSHOP are in for a rare treat indeed.

Tense strings (a true Haver hallmark), relentlessly catchy riffs courtesy of Kerrison and Treacy, a robustly-proportioned bass line from Clint Harris, signature Bobby Kennedy drumming (and they let him off the leash in this one) and some vocal pedal hijinks all add up to a single of epic proportions and a guaranteed airplay hit.

Until The End Of Time

The long-awaited third album from Opshop Until the End of Time includes the hit single, Pins & Needles.