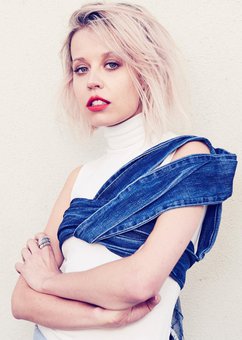 Catch Ruby Frost on stage, and the eclectic pink-haired singer has a commanding presence - belting out her unique style of electronic pop, dancing in front of psychedelic visuals, and wearing some sort of metallic ensemble.

Catch her off it, and she's an insomniac songwriter (real name Jane de Jong) who works late into the night, fusing pop hooks with disco beats.

The New Zealand singer was first put on the map when she won her country's nationwide MTV '42Unheard' talent search in 2009. From here, she signed with Universal Music NZ and began working on her debut album VOLITION, with New York producer Chris Zane (Passion Pit, Holy Ghost!, The Walkmen).

Meanwhile, Kiwi dubstep duo Mt Eden remixed Frost's song 'O That I Had' which quickly received over 1,000,000 views on YouTube.
Frost lists her influences as Kate Bush, The Knife, David Bowie and Fleetwood Mac, and the debut showcases her distinctive voice scaling over infectious melodies, with lyrics on lost love and outer space.

She's also had her share of songwriting accolades; winning a Grand Prize in the 2010 John Lennon Songwriting Competition (Section I: Pop Category), getting 3rd place in the 2011 International Songwriting Competition's Pop Category, and making it to the Top 20 of the prestigious NZ Silver Scroll awards.
Ruby Frost's first single at commercial radio, 'Water To Ice' hit the Top 10 on New Zealand radio charts in 2012, and was featured as a Big Song on UK tastemaker site PopJustice.com; who said Ruby has, "A hint of crossover superstar about her."

The follow-up track 'Young' then became a summer anthem, charting at Top 20 on NZ radio and sparking off a national house party tour that radio station The Edge sponsored - Ruby and band stopped in 20 houses from Whangarei to Invercargill.

At the same time Ruby modeled for Australasian retail-chain Glassons, in their 'Summer of Sounds' campaign alongside musicians The Veronicas and Watercolours.

In 2013, Frost signed up to work as a judge and mentor on the first season of X Factor New Zealand with All Saints singer Melanie Blatt, Daniel Bedingfield and Stan Walker.

She's toured with Cut Copy, Van She, Mt. Eden, Six60 and Evermore - and been selected to open for a long list of international acts including Fun, Garbage, Diplo, Nero, Digitalism and Kimbra. Shirley Manson herself personally requested that Frost open for Garbage's NZ tour (via a tweet); later telling Coup de Main Magazine that Frost is, "really interesting, she's first class in the scheme of things."

Her live show has built up a strong following on the local festival circuit - Ruby and her band have repeatedly brought their high-energy show to Rhythm & Vines, Rhythm & Alps, and Parachute crowds. They've also played industry showcases in New York (CMJ 2010), LA (The Viper Room), Brisbane (Big Sound) and Sydney.

Songwriting and theatrics have been part of Frost's journey since the start. She explains, "I've always dressed up and pretended to belong to other worlds. For me music is an escape, a way to get out of myself and see what is happening around me with fresh perspective." 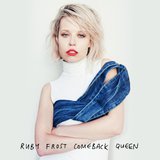