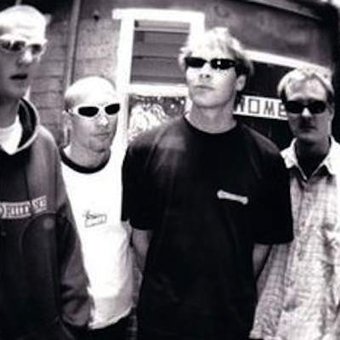 The sadly now-defunct Muckhole are arguably the biggest punk band New Zealand has ever had.

Coming out of the North Shore during the mid-90s playing an East COast USA-influenced brand of hardcore, the band released their debut EP Where Are The Corndogs? on Felix Records in 1996 which immediately gained them nationwide attention, especially through the popular skating Don't Wanna Know video.

Muckhole went on to play supports for all the biggest international bands arriving in the country, including the likes of Green Day, the Sex Pistols, The Offspring and Pennywise. Their next single, Cool Guy was one of the few NZ punk songs ever to chart, and their full-length album Kooza has since been recognised as a classic of the genre.

As for the end of the band, singer Sean O'Brien spoke of the possibility in an interview prior to the band's demise. "It's about using Muckhole to have fun. We'll pursue any avenue we can take it," says Sean. "But we're not gonna slug it out forever if we're not going anywhere. While it's fun we¹ll keep doing it, but as soon as it becomes work to keep the public face of Muckhole alive, we'll go back to how it was before and do our own things. We're not banking on it. We're not hoping to quit our day jobs. It¹s just a good hobby."