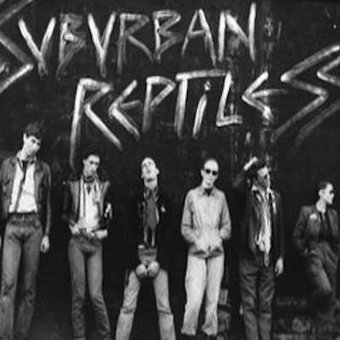 Suburban Reptiles, (along with The Scavengers), were the first 70s styled punk band in New Zealand.

Started by Jimmy Joy (Brett Salter) and Simon Grigg, who became manager by default, the band soon grew to the relatively core line up of drummer Buster Stiggs (Mark Hough), vocalist Zero (Clare Elliot), Jimmy Joy on sax and Billy Planet (Will Pendergrast) on both bass and guitar. Part time contributions came from bassist Bones Hillman and Johnny Volume from the Scavengers on guitar.

There were some predictably turbulent gigs early on, which included the band being thrown out of the Auckland University Quad, being fired from a Catholic Boys School ball after one song mentioned something to do with swastikas and one capacity gig at the Uni Cafe where Billy Planet emptied the cafe's full rubbish bags over the crowd.

In late 1977 Suburban Reptiles were signed by Phonogram NZ with the label suggesting the band rush out covers of English punk hits like the Boomtown Rats.

Suburban Reptiles only released two singles and one track for the film Angel Mine. Megaton/Desert Patrol was recorded over three sessions, the first of which was supposedly produced by Tim Finn, who fell asleep ten minutes in.

The 7" vinyl single Saturday Night Stay At Home/45 Single was produced by soon to be member Phil Judd. An album was partially recorded but the tapes have long since disappeared, however, Billy Planet claimed in 2004 to have discovered these again or at least copies.

In late 1979 the remnants of Suburban Reptiles mutated into the Swingers with Bones ending up in Midnight Oil. Zero had been arrested for saying 'fuck' on stage (and acquitted, which is now a NZ legal precedent), and become nationally notorious. 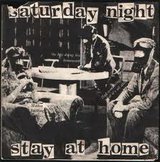