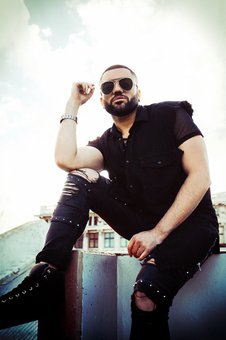 Robin Johnson is more than a singer: he is a sentient force of nature. Now publicly trademarked as RΦBN, he is a relentless, diverse and hauntingly charismatic artist with a passion for progressive electronic music and cinematic urban chants.
Currently based in Melbourne, He is surfacing on the local music scene with a fresh souled out blend of air filled R&B melodies, deep grooves and crushed vintage analogue production aesthetics.
As the first male contestant of "The Voice" turning all four chairs into the finals of his season, Rob managed to fall forward well beyond the usual expectations and reach out to people with his distinctive sound and vocal approach. He also had the privilege of being mentored by influential artists the likes of Alicia Keys, Guy Sebastian and Boy George, as well as working with Grammy-winning producer Eric Dubowsky with whom he released his single "Red" in 2017 under Universal Music after producing for William Singe whom went on to sign a lucrative contract with Sony USA afterwards.
Rob left high-school life behind after becoming a record producer from his bedroom, feeling that his creativity needed to be stimulated beyond his small town. He never looked back, and became an entertainment industry professional in the face of much adversity for growing independent artists of the time, becoming known to major audiences at the young age of 18, particularly across NZ and Australia and proliferating a name for himself to the millions.
Following his appearance on numerous TV shows and extensive publicity run, he was able to sign a production deal with an indie label "Moonlight Sounds" and bring his music to an even larger audience with a hit self produced song entitled "Boy's Don't Cry"which garnered attention on multiple major networks Radio and Television alike and now he is set to repeat the formula having now secured yet another independent deal in Australia and is set to release an EP with world wide digital distribution in 2018.
Rob is on his way to raising his international profile, and he shows no signs of slowing down.