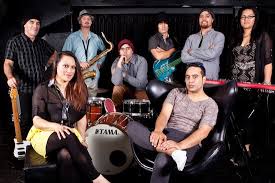 1814 are an 8-piece Reggae Band whose members live in the hills surrounding the beautiful Whangaroa Harbour and nearby town of Kerikeri, Northland.

NZ Reggae band 1814 have been performing their take on Kiwi flavoured Reggae since 2004 and have travelled extensively throughout New Zealand and Australia.

1814 have enjoyed national success with their debut album "Jah Rydem" which Patu describes as having sweet soulful vocals, upbeat grooves, wicked sax lines and a strong message of Peace, Love and Harmony. The album was recorded at world renowned recording studio, York Street in Auckland.

"Jah Rydem" reached number 1 on the New Zealand indie charts with 'Jah Rastafari' reaching gold status in digital downloads. The band also received an award in 2010 and 2011 at the Maori Music Awards for 'Whakahonohono Mai' which was the most played song on Maori radio.

1814 originally came out of the hills surrounding the beatiful Whangaroa Harbour where the inspiration for writing music comes from.

The name, 1814, was taken from the year the Gospel arrived at Oihi, in the Bay Of Islands. Missionary Samuel Marsden held the first sermon there on Christmas Day, 1814. This is the inspiration behind delivering a message of peace, love and unity to all people throughout the world.