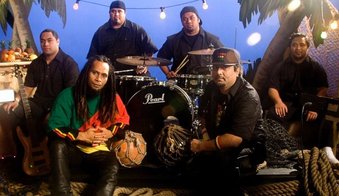 Are you curious about that timeless Rastafarian sound coming from your radio speakers?

Have you wondered where this group from behind the shadows has been hiding all these years, well it's never to late to discover the distinctive reggae hit making sound of "Sweet & Irie".

Sweet & Irie is the creation of singer/ song writer Edward Ru ( Lead Vocals) the vibrant front man that is leading a new wave
of reggae music from the South Pacific.

Born in South Auckland and raised in Otara, before moving back to his home land of the Cook Islands as a teenager, the young musician was witness to a tough upbringing that in later years would be the inspiration that fuelled his authentic song writing abilities.

" Like any other child raised in that environment, we grew up the hard way, I watched my brother grow up to be a patched member in a gang and I thought I didn't want the same things for my kids, so through the music I can change that path and work to be an inspiration and a role model to my family" explains Ed.

Although it appears that Sweet & Irie burst on the local music scene with the top 10 hit "Feels Like Magic" alongside Horsemen Family and their guest appearance on local favourite "Take It Out South" with Brotha D, the various members of the band have been refining their craft since late 2000 when Ed decided to pick up the Ukulele.

" I decided I wanted to learn the Ukulele and when I picked it up it was a natural progression for me, from there I was inspired to learn other instruments and pursue a career in music" says Ed.

Ed was so inspired with the thought of putting a band together he enrolled in a tertiary course to learn the fundamentals of all instruments, Bass & Rhythm guitar, drums, keyboards and vocal training. After successfully completing the course he went on to do papers in contemporary music, graduating in 2005.

"As soon as the course was finished I set my sights on uplifting the nation with my irie sound, and Sweet & Irie was born on that day" laughs Ed.

With a powerfully distinctive voice and a passion for live performance Sweet & Irie wasted no time in establishing a name for the band, doing locals gigs and opening support dates, however Ed thought there had to be a better way to get the attention of the people and hopefully a few record labels along the way and constructed a plan to get his music heard.

In 2006 using penetrating lyrics that touched on a subject that had began to effect the wider community of Aotearoa Sweet & Irie independently recorded and released "Ban the Burn" an ante "P" song that cut home with a number of people culminating with the self funded and directed video getting played on local music TV station C4.

Follwing the attention generated from "Ban The Burn" Sweet & Irie had a chance meeting with Dawn Raid CEO Brotha D at a family Day Concert in West Auckland, the band exchanged numbers and Brotha D expressed interest in the band and said when you're ready come and see me and we'll get you in the studio.

Fortunately for both parties Sweet & Irie took that advice on board and 1 year later in June of 2007 they dropped off their demo to the Dawn Raid HQ, Brotha D remembering the powerful vocal ability of the lead singer invited the Band to feature on his upcoming album "Element Of Surprise", the first song recorded was "Take It Out South" which went on to be the lead single off the album and gained significant radio & video play all over the country firmly cementing the name Sweet & Irie in the minds of local fans.

With a certified local anthem under their belt Dawn Raid wasted no time in signing the band to the chart topping label and begin work on their debut album "Sweet & Irie".

Scheduled for release in 4th QTR 2008, the debut album features powerfully distinctive & passionate vocals from lead singer Ed Ru, with lyrics influenced by the Irie legacy of the legendary Bob Marley. Original songs like "Uncle Bob" & "Sweet & Irie" are timeless Rastafarian tunes that speak to the foundation of reggae while new songs like "Mama, Don't Cry" & "My Girl" catapult the sound into a new dimension ready for sound systems and radio speakers everywhere.

"Sweet & Irie" the new sound of Reggae in the South Pacfic"

From it's birth on the island of Jamaica, through it's journey to the South Pacific, Reggae music has become a staple of Island life &amp; culture, and local Rasta man ...