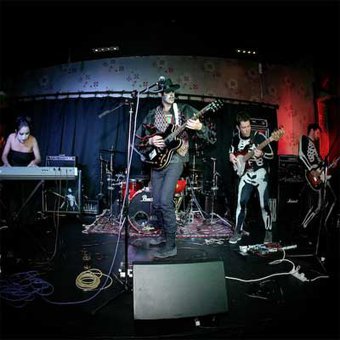 Circus-rock. It's the kind of pigeon-hole description that would no doubt make Rolling Stone editors balk at the implications.

Battle Circus make music you'll instantly either love or dismiss - for the simple reason that it won't satisfy minds that rely on the predictable. Their cacophonic mix of sweeping psychedelia, Eastern-European folk, soaring classical piano and monstrous rock riffs seem to resonate of a different time and place.

Take their first single Send In The Clones- a rumbling, rolling slab of weirdo rock that takes a satirical jab at the ironies of war, religion and patriotism. This is by no means music that takes itself too seriously, yet can't help but hint to the listener that there are layers of meaning yet to be unraveled.

The accompanying video for Send In The Clones captured the imaginations of audiences everywhere and truly pushed the boundaries of what an independent New Zealand band can achieve with the medium.

Conceptualised from start to finish by the band in 2005, it leads the viewer through a surreal universe of power-hungry dictators, clone armies and the children who stand to be enslaved by them, before questioning where the true balance of power lies. The ambitious debut proved to be one of the most intriguing videos of 2005, featuring on JuiceTV, C4 and XtraMSN, and taking away 'Best Cinematography' at RadioActive FM's 2006 'Handle The Jandal' Music Video Awards.

Now Battle Circus return to the airwaves with their next single, Utopium. A driving rock anthem, its organ-laden, rambling off-beat verses dance around a thick distorted bassline, before crashing into a blistering chorus, all screaming guitars and menacingly heavy drums. This is no doubt the perfect follow-up for those who found it difficult to head-bang to the jagged waltz rhythms of Send In The Clones.

For the new video the band once again ignored any notions of conventional music-video making. At the beginning of 2006 they enlisted a small group of artists and animators to bring their vision for Utopium to life as an epic animated adventure. A considerable shift from the dark, claustrophobia of Send In The Clones, it's fast-paced action thrusts viewers into the brilliance of a spectacular new world, filled with expansive landscapes, curious inhabitants, flying dragons, and the unfolding destiny of a traveler who seems to be perpetually trapped in this lucid realm. Conceptualised and funded entirely by the band, with almost a year in production, it is now set to explode onto screens in 2007, and guarantees to be unlike anything else you'll see from a New Zealand band this year.

Similarly unique and unconventional is the band's immersive and intriguing website (www.battlecircus.com). Yet another extension of the Battle Circus realm, it guides visitors through the final legacy of a mysterious academic, while they discover the sights and sounds of the band.

It's only been three years since Battle Circus won Channel Z's Unsigned competition with their very first demo, and the testament of their dynamic live shows and sheer popularity on the net have cemented people's fascination in the band. It's hard to say how musical trends start, but standing at the back of a Battle Circus show, you find it difficult to fight the conviction that this is the beginning of one.