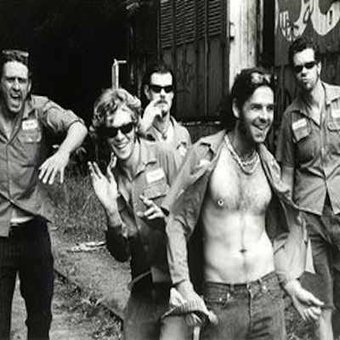 Like most up & coming bands, the group started their career by playing small gigs at local pubs and at various well known live venues. Then soon went on to touring the university circuit; quickly making a name for themselves with energetic and often outrageous live stage performances and therefore forming a solid and dedicated following throughout the live music scene.

Head Like a Hole were then signed to Wildside Records and began their recording career. 1992 saw the release of their debut album, '13' which the band largely produced themselves with Brent McLoughin from 'Bailter Space' engineering, mixing and mastering. The single 'Fish across Face' successfully made it into the New Zealand Top 10 charts.

Head Like a Hole continued touring and performing the university orientation circuit. Then returned to the studio in 1993 to record their second album. 'Flik Y'Self off Y'Self'. Which was released in stores in 1994 providing two singles. 'Faster Hooves' and 'Spanish Goat Dancer'.

After the release of two successful records the band's popularity and exposure increased, and so Head like a Hole remained on tour. Playing to capacity crowds and sold out venues throughout the country, and in 1996 secured a position on the bill to play The Big Day Out festival. That same time the band suffered a sudden and tragic loss, with the death of their Manager Gerald Barry Dwyer.

And it was late 1996 where they headed back to the studio, this time travelling to Australia and worked on a third album. 'Double Your Strength, Improve Your Health & Lengthen Your Life'. 'Cornbag' the first single from the album was released in November 1996, but received only moderate chart success. The release of the album soon followed and with it, a string of singles. 'A Crying Shame', 'Keith' and 'Hootenanny' all charted well upon each individual release.

In 1997 HLAH were once again invited to play Big Day Out, this time scheduled as the final act after the headliners, where they entertained a HUGE crowd in Auckland's Supertop tent. Within that period HLAH also released a video for their version of Bruce Springsteen's song ‘I'm On Fire'.

In November 1998, the band released its final real album, 'HLAH: IV - Are You Gonna Kiss It or Shoot It?' which featured two successful singles, 'Wet Rubber' and 'Juicy Lucy' also notable tracks off that album are 'Mahahrahja' 'Comfortably Shagged' and 'Hot Sexy Lusty'.

Sometime in early 2000, the group disbanded. A 'Best of' album was released in November, entitled 'Blood on the Honky Tonk Floor'. 'Blood On the Honky Tonk Floor' featured two discs, the first covering the band's best and most recognised songs, while the second included all of the cover songs the band had recorded over their career.

Currently in 2008-2009 Head like a Hole have announced a long awaited comeback, with confirmed tour dates in both Auckland & Wellington before performing a headline timeslot at Homegrown Festival March 2009.
Now most recently, Andrew, Booga, Nigel & Mike are all extremely enthusiastic about the future of Head like a Hole and are predicting much more to come in 2009. 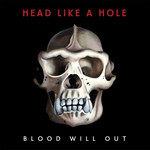 The titans of NZ's heaviest hardest most bad ass rock return with their best album to date. The much anticipated, full-length album Blood Will Out features Glory, Glory and Swagger ...