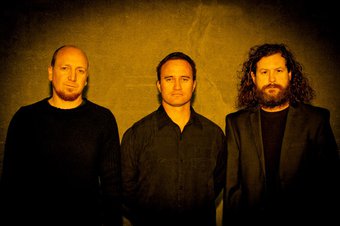 The band consists of guitarist Jeff Boyle; bassist Maurice Beckett; and drummer Jason Johnston. They have been compared to such bands as Mogwai, Sonic Youth, Sigur Ros & ISIS, though they largely eschew any vocals or samples in their songs.

At times putting the post- into rock, and at others kicking the whole bloody fence down, Jakob’s lush and textured take on the guitar/bass/drums format continues to broaden and enthrall with every performance and release. Their music is captivating and mesmerizing, the sedate becoming devastating in the blink of a crowd’s collective eye. Echoing the graduated inclines and unexpected progressions found in their music and the expansive landscapes of their surroundings, this Napier three-piece has developed consistently, if sometimes unpredictably, since their formation in 1998.

Since that time Jakob have connected listeners the world over with their cascading crescendos, performing at South By Southwest 2005 (one of the Austin Chronicle’s picks of the festival), Headlining Denmark’s Forma Nova Festival, showing their wares across the Tasman several times including playing alongside Australia’s equivalent of NZ rock heroes hero’s Shihad, Cog and touring the UK, Europe and USA extensively supporting the likes of Isis, Pelican, and The Hidden Hand along the way. Not that the band hasn’t left audiences around New Zealand enthralled – notable shows around the country include Big Day Out appearances in consecutive years, performing at The Mercury Rising and Rhythm & Vines festivals, a tour playing with former Can front man Damo Suzuki, and support slots with US acts Thrice & ISIS.

Their full length album releases; ‘Subsets of sets’ (2001), ‘Cale:Drew’ (2003) & ‘Solace’ (2006) and are able to find in Australia out through Inertia Music, in North America through CTD, Graveface Records and Southern[home to the likes of Fugazi, Gravy train, Godspeed You Black Emperor, The Melvins, The Black Heart Procession, Dalek, Lady Sovereign, Jesu]
In Europe & UK you can find Solace through Forte Distribution, Cale:Drew and Subsets of Subsets are available through Conspiracy Records.