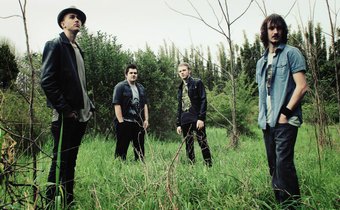 Manic Baby Dolls are a 4 piece West Auckland band. Our variety in musical taste has us working on some amazing originals that vary in style: hard rock/punk rock/alternative/metal.

Formed around March 2009 originally a three piece covers band, we started as friends causing havock, fun and laughs in college. After our school years, an increasing interest in music made us decide to form a band.

After our first practice we were hooked with Danny Goodwin smashing away on drums, Leszek Byrski (Pole) shaking the earth with his skills on bass and Kyle Arnold melting faces on guitar and have been practising every week since and eventually started working original material.

Playing at many many parties, blowing the roofs off garages, playing in houses, halls and bars, we are building up our list of gigs each one better than the last, countless awards (as we call them) from noise control, anywhere we could play, we would, but something was missing...

During one of our band practices, after many bourbons and a whole lot of caffeine we decided to end practice with a jam session to try and come up with some new material, whilst we were jamming, by chance we played a series of tritones they were played in such a dissonant and evil progression that it split open a hole in the universe! we had no idea what to do, we were in shock just staring at this hole that opened up in our practice room.

Then, all of a sudden, a figure appeared coming towards us from inside the hole. As the figure became clearer we could see it was a person, this person was no other than Rory McMaster! he stepped out of the hole into the room holding nothing but a six pack of beer and a microphone.

Rory came bearing endless stories of happiness, sadness, love and loss, each one always making us laugh along with him, he had been drawn to us by the music we were playing and said he was singing along to it on the 'other side' the combination of our music and his voice was so powerful that it split open both universes bringing
us together to form a really awesome band that is...

Our latest song has finally been released!!! It is a catchy rock track with a bit of a blues feel to it.The song is about someone who is tired of ...