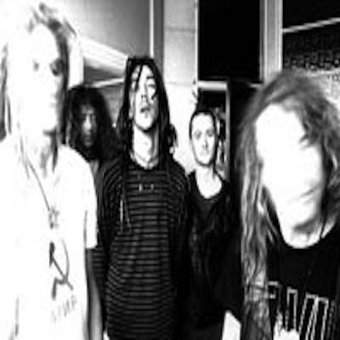 They found the isolated location an intense experience as they focussed on the album. At a later session Brent and the co-producer returned to Mountain Studios to complete the mixing of Sloth. It's ironic that even though they were in a pleasant rural environment, it may as well have been Siberia. The band were confined to the studio night and day — working long hours to complete the project.

The intensity of the experience is undoubtedly echoed in pumkinhead's final prodcut. An awesome, in-your-face album that may be the Loudest piece of music to come out of New Zealand so far. The dauntingly heavy rhythm section of Jason Peters and Vaughn Watson deliver a monstrous sound, captured brilliantly by co-producer David Wernham.

Singer Brent Milligan has a background as a guitarist and ironically guitarist Aaron Hogg (these two are the main song writers) has been the singer in a prior band. Their working relationship is not without friction but they've worked together for several years. Both were in the ultra hard edge encounter Gravel Rash, from whence Pumpkinhead grew.

PUMPKINHEAD see Sloth as a deliberate move away from the quick disposable pop of tracks such as 'Home' on the 1993 Failsafe Avalanche compilation. "With the harder edge," says Brent, "We are not moving in a different direction but returning towards what we used to do, retaining that pop feel."

On Sloth, Pumpkinhead seem to have reinvented the two minute-something song. The first track 'Inflatable Man Syndrome' is only two minutes (and one second) long. "It''s our punk feel," says the singer, "Snappy songs are good . . . with hardcore sounds, wall of noise guitar, people can get bored quickly."

Milligan sees Sloth as "a document of exactly how we were in that point of time. We definitely had in our minds to record something that had a bit of production to it . . . not the trend of recording on 4-track."

Guitarist Jason Harmon left Pumpkinhead December 1994 (after the recording of Sloth and after not enjoying touring) and the new guitarist David Hunt (from Chch's Supertanker) started with the band on four January South Island dates opening for Supergroove. The band went on to play the BIG DAY OUT, Nile River, Takaka and Strawberry Fields Festivals.

With a blinding performance by the band at Strawberry Fields, Hunt proved to be an unqualified success in the line-up. The NZ Herald writer Russel Baillie said of their set at Strawberry Fields: "Pumpkinhead put in the most explosive turn of the weekend (even without the frontman's firebreathing act) with their grunge-strained, high crunch factor pop."

Pumpkinhead's second chart single 'I Like' reached No.16 on the NZ Singles Sales Chart despite the fact the video received only one late night national TV play. 'I Like' is a celebration of Kiwiana including vegetables, weetbix, dole and Shortland St. The song has guitarist Aaron Hogg on vocals. The single has two bonus tracks not on the album Sloth. The two bonus tracks are 'Lights Are Out' and 'Decaf'. The latter song was big over summer on student radio nationally.

Following the release of Sloth, Pumpkinhead have toured nationally, opened for Faith No More, released two singles 'Third Eye' (late 1995) and 'Nark' (1996), featured in a Coca-Cola advert and played the BIG DAY OUT. 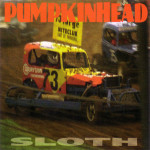