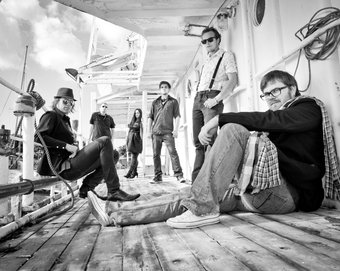 Royal Falcon are an Auckland-based six piece band, making music akin to a deranged drifter at the window. Their raucous psychedelic country blues songwriting merges dark narrative and creeping dynamics with an explosive aural assault to create something q

Founding members Dan Pilkington (Vocals, Guitar) and Gareth Hays (Bass) established a songwriting partnership through their long-standing association with Maternal Records, having been heavily schooled in the primal rock outpourings of that label. The earliest Royal Falcon songs were
formulated during destructive alcohol binges by these two, which perversely proved fruitful to their songwriting process. Armed by late 2007 with a solid catalogue of songs, Pilkington and Hays decided to expand operations and Royal Falcon was born:

Perry Hooper (Guitar) is the gutsy blues protagonist at the forefront of the band. Hooper has a transcendent affinity for the Royal Falcon, and his searing leads cut through with surgical precision.

Kyla Dyresen (Piano, Organ, MIDI) is a classically trained pianist slumming it in a rock band, her rich intuitive melodies and organ runs flesh out the bones of the songs, with overlaid MIDI samples forming a mind-altering spatial wash.

Heath King (Vocals, Drums) is the swinging dynamo that makes this bird fly, also handling lead vocals with aplomb. King is a proficient percussionist and demonstrates an array of styles, but relishes the Falcon's call to keep it simple and solid.

Jared Greenwood (Guitar, Vocals) lends a deft hand and soulful voice, adding dextrous guitar lines to the mix. A long standing co-conspirator, Greenwood is now fully in the fold, and has stamped his presence on the Royal Falcon sound.

Following on the back of a fiercely raw self-titled EP in 2008, Royal Falcon released their warmly received debut album ‘Royal Falcon Ruined My Life' in September 2009. The band was rocked later that year by the untimely death of inspirational leader Dan Pilkington, but remain committed to their original vision, pushing on to release second album ‘Royal Falcon Is The Ocean' (the majority of which was written and demoed prior to Pilkington's passing) in December 2010, and have now descended on Zone1 Studios to incubate the next hatchling, due later this year.

Royal Falcon's music has been picked-up by and features heavily in South Pacific Pictures' popular television series ‘Go Girls', where it has been used to great effect, exposing the band to an audience outside of the sweaty Auckland live scene.