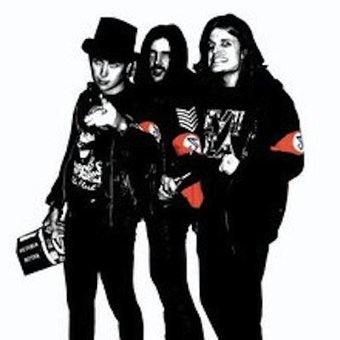 Slavetrader are one of Auckland's true heavy rock bands.

Their sound can be likened to the original 70's acts of ACDC, Black Sabbath and even early Iron Maiden. With a live performance of such high energy and honesty, they're a force to reckoned with in today's rock scene.

The band first formed in 2002 when Matt Alien and James Jett made the move north from Christchurch in order to make a real go of a career in music. Matt Alien was already a well known musician having been the former front man and guitarist of legendary Christchurch band "The Hi-Tone Destroyers". Both he and James Jett (on bass) had been involved in numerous underground projects in the Christchurch scene.

Since formation Slavetrader have gone through some line up changes as most every band do. Paul Roberston was quick to join on drums when the opening became available. He was no stranger to the Auckland rock scene. Paul had been a previous member of "The Rock and Roll Machine" and "The Rainy Days", he'd even filled in for "The D4" on an Australian tour while they were auditioning for a new drummer. Paul brought with him the musical background to help lift Slavetrader off the ground.

Newest member Andrew Halford joins Slavetrader on guitar. The live chemistry between Matt and Andrew is an identifiable credit to the band with each shared guitar solo careening back and forth and almost becoming a guitar duel between the two guys. Andrew is the youngest member of the band but can certainly hold his own when it comes to playing electric guitar.

In 2003 Slavetrader shared the stage with long time heroes "Dead Moon" (from Portland, Oregan) on a national 10 date NZ tour. To this date they've crossed the Tasman three times to play for the Ozzies, released two 7" singles, recorded "The People's Party" Ep with Dion and Vaughn of "The D4" and are currently working on material for their debut full length album.

Slavetrader have recently completed their latest music video for "Nothing to Lose" and Chris Stapp (of TV's Back Of The Y) has received a "Handle The Jandle" award for "Best Exploitative Tactics to Promote A Band" for his direction of their first video "The People's Party".

With this wealth of experience behind them and a now solidified sound and line up, Slavetrader are set to take on the world. If you are a lover of genuine rock music and are forever pulling out your old records due to a lack of authenticity in today's live acts, Slavetrader are a band not to be missed, and they will be making their way to a town near you soon.