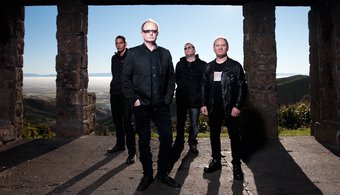 Sleeping Dogs are a group of four misfits with eclectic musical backgrounds.

They formed back in 2009 and are based in Christchurch, New Zealand. For an aspiring super group with a BIG sound, you can't begin from a more humble or out of the way place.

It all started with Thomas Reid; a mad, classically trained pianist and self confessed Bowie addict. One day and without warning he was inspired ("compelled by the Rock Gods" he will tell you) to start a rock band.

The first to jump aboard his rock ‘n' roll odyssey was, old school friend and multi instrumentalist, Rocky. With considerable performing experience, Rocky is a man who prefers to maintain an air of mystery. In concert you're likely to see him bouncing ‘round the stage like his sneakers are on fire. He's frequently the group's lighter relief and therefore an ideal balance in an industry that attracts deeply brooding artistic types, i.e. guitarists. He is, according to Thomas, "the only bass guitarist in the history of Rock that refuses to play the tonic"!

Helping Rocky stoke the Dogs rhythmic rock ‘n' roll burner during the formative "Myth Reducer" period was multitalented drummer and video director Rick Harvie. Possibly originating from Mars, he was instrumental in shaping the group's feel and conceptualising the band's videos and cover art. The Dogs now have a number of high quality videos, which can be viewed on their official Youtube channel. Rick has since left the Dogs and returned to his home planet.

The next member to seek rock 'n' roll refuge with the Dogs was guitarist Ace Palenski. His is a story similar to the phoenix rising from the ashes, having been kidnapped by a group of fanatical jazz musicians straight out of High School. He was suspended in a time warp (not unlike Buck Rogers) for the whole of the 90's emerging "uninfluenced and unscathed by the unskilled garage band movement" of the era. As a workforce escapee he has assumed his place in the group as "da mean axeman".

In April and May of 2010 the group all travelled to Modern World studios in the UK, thwarting the Icelandic volcano's attempts to shut down Europe, to complete their debut album "Myth Reducer". There they employed the expertise of the widely sought after producer Greg Haver, in house mixing guru Clint Murphy and session string group, the Vulcan String Quartet.

This year the group have been busy (in between earthquakes) rehearsing, making videos and recording new songs. Their most recent video and the title track from the album, "Myth Reducer", stars actress Brooke Williams and has recently received airplay on C4's Homegrown. Various tracks from the album have also been heard on Kiwi FM.

With the departure of Rick, Sleeping Dogs welcomed the newest member of the pack; he was discovered one eerily foggy night at a remote stretch of road somewhere between Christchurch and Timaru. Sitting there, as if it had just fallen from the sky was, what appeared to be, a giant egg... and from it's cracked outer shell Infinite Love Child revealed himself. The band didn't know if it was man or omelette, but it turned out that Infinite was a dedicated drummer and wouldn't want it any other way. His feel and enthusiasm for the drums and music in general is now taking the group's live performance to an entirely new level. Check it out for yourself on the North Island leg of their Live & Loud Tour, which also features Supermodel.

In May 2012, Sleeping Dogs returned home to NZ from the UK after wrapping up their latest album. It was at this time that Ace felt that with his guitar parts completed on the album, his time with the Dogs had come to an end. Joining the current line up in place of Ace is the very talented Tony Pantera, who promptly began to learn all their previous and new musical material with gusto. He will be continuing to stay true to the music, while infusing the songs with his new flavour. We cannot wait to test his musical abilities live!

Sleeping Dogs are: Thomas Reid; a sincerely inspired and seriously talented songwriter, pianist and vocalist, Rocky; a melodic and soulful bass player, multi instrumentalist and arranger, Tony Pantera; a skilled and emotionally charged guitarist and Infinite Love Child; a uniquely focused and special kind of drummer. Their songs have been described as "unavoidable, deep and unapologetic", their sound and style as "extravagant, big, epic and over-the-top, with long, long instrumental parts". 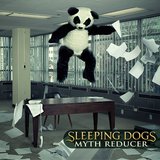 Immediate download of 11-track album in your choice of 320k mp3, FLAC, or just about any other format you could possibly desire.