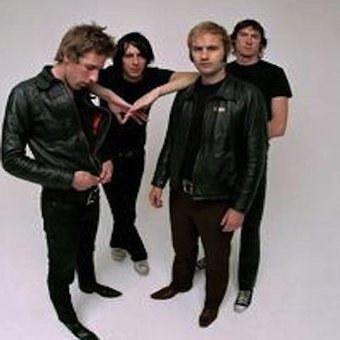 The D4 were a rock band from Auckland, New Zealand.

The group was assembled by vocalist/guitarists Dion Palmer and Jimmy Christmas, who put together a collection of songs and built a four-piece combo, featuring founding members English Jake and Rich Mixture, during late 1998 and started playing at the Frisbee Leisure Lounge parties along Symonds Street, followed shortly thereafter by inner city pub gigs. They have also played at the Big Day Out and at the SXSW Music Festival in Austin, Texas.

The group's debut EP was released by Flying Nun Records in 1999 featuring the tracks "Girl" and "Come On!". The band was later enhanced by members Vaughan Williams (Vaughn) (bass) and Daniel Pooley (Beaver) (drums). After the success of The Strokes and The White Stripes, The D4 and fellow New Zealand garage rock band The Datsuns became a critical and popular hit in the UK and Japan. The D4 went on a UK tour supporting The Hives.

As of May 2006, Breakfast announced that after eight years, the D4, would be taking an indefinite break from the music industry. After the split, Rich Mixture went on to replace Paul Robertson as the drummer of The Rock n Roll Machine, bassist Vaughn joined Shocking Pinks, an Auckland based indie pop act and Jimmy Christmas formed the rock group Luger Boa who have supported Shihad on tour. Most recently, Dion has moved to NYC, formed a new band called The True Lovers and also plays bass in A Place to Bury Strangers.

The D4's track "Get Loose" has been featured in several Bacardi Rum commercials in the United States.

Out Of My Head

The long awaited follow up to 2001's '6Twenty' is finally here. A sweltering mass of an album. Includes the hits 'Sake Bomb' and 'What I Want'.