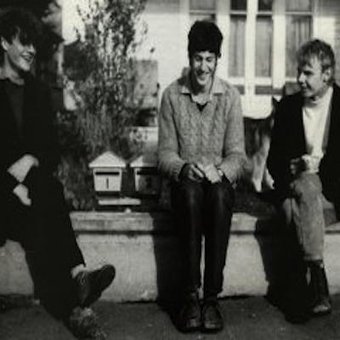 They had a drum machine called Herbie Fuckface, who lived up to his name by subverting most of the duo's efforts onstage and quickly called for human replacement in the form of another old Kaikorai High schoolmate, John Collie.

The trio set about kicking up a storm, touring up north on the famous Looney Tour of 1984 and recording the Double B-side seven inch while they were in Auckland.

Early in 1985, the band recorded an EP, Cut it Out and in June embarked on a short tour. Towards the end of the tour the band were travelling south from Auckland by train, and Elsey, in high spirits, climbed out of a carriage and was instantly and tragically killed as the train passed under a bridge.

The two remaining members of the band decided not to continue with the name, but later went on to form the Straitjacket Fits.

Nerves contains all of the Doublehappys Flying Nun recordings, two songs which first appeared on the live EP, How Much Time Left, Please?, released in the UK in 1991 and ...