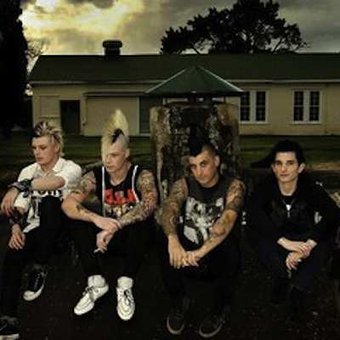 Storming out of their hometown of Auckland, The Rabble are exploding out of New Zealand and into the hearts of punks worldwide.

Harnessing the advantages of both experience and youth, this powerful and passionate band have been a band for over seven years but they're still only just out of their teenage years and are truly unstoppable. One listen to the gravelly vocals and infectious soulful punk anthems on their 16-track second album ‘The Battle's Almost Over' and you'll be hooked.

Formed in 2001 by brothers Chazz and Rupe at the young ages of 14 and 15 respectively, the first six years saw them honing their gritty yet catchy sound and seeing several bassists come and go, before settling on recent addition Jamie Douglass. Their DIY ethos has seen them independently release debut album ‘No Clue, No Future', the ‘This Is Our Lives' EP and the mighty sophomore full-length ‘The Battle's Almost Over'. Relentlessly touring all over New Zealand, the UK and Europe over the last few years alongside Agnostic Front, The Unseen and The Living End, to name just a few, they're also no strangers to festival stages, playing to over 1500 people at Auckland's Big Day Out and, more recently, to a crowd of over 2000 on the main stage at the Blackpool Rebellion Festival. Having given away a compilation of their best songs, titled ‘New Generation', with issue 102 of Big Cheese Magazine, their huge accompanying UK headline tour of the same name has recently won them many more fans up and down the country and spread the fire of The Rabble burning bright into the Northern hemisphere. So what inspired their several month-long mission to the other side of the globe at this time?

“We decided we were strong enough to take our music to the world now after all these years, starting with the UK and Europe. We have a new generation of punk rock music at hand. The UK deserves another round of real, honest and soulful music and we want to kick off that march!” vocalist/drummer Rupe confidently declares.

Battling on and winning fans and friends worldwide, the war may be just beginning but The Rabble's awesome arsenal will see their punk rock army grow and grow. Raise your voice and rise up. 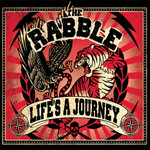 True talent doesn't just lie beneath a hit song, ground breaking record sales or a successful World tour, true talent shines brightest in the words we speak and the actions we take. When the subject is successful New Zealand trio, THE RABBLE you can rest assured that the talent will be on full display and the music will always be heard loud & clear.