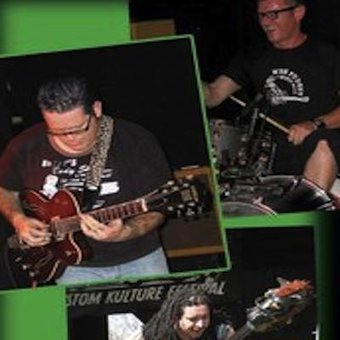 The Voodoo Kreepers hail from New Zealand at the bottom of the world and were born by way of a concert called the Alley Kat Stomp in April of 2006.

Guitarist / Vocalist Ricki was one of the organizers of the event and knew he could throw a band together quickly to open up for Australian band The Bobkats. A quick rehearsal was had as a 4 piece, with friend Alan Lavis guesting on guitar. Only 2 originals were written at that time and performed along with many cover songs to fill the set.

After the Alley Kat Stomp was over, Ricki, Julian and Geoff never found time between other committments to get together and rehearse. UNTIL NOW. Yet again The Voodoo Kreepers found themselves faced with an offer of a gig they couldnt refuse. To open for Slim Jim Phantom of the legendary Stray Cats. Well with only 5 weeks to that gig the boys put their heads down and got to writing a bunch of songs. That show turned out to be an absolute success for The Voodoo Kreepers, winning a whole new set of fans young and old.

If you want to be cooler than your friends, then start bragging about how you listened to The Voodoo Kreepers before everyone else did, trust me, this will help you score with members of the opposite sex in no time. Our new CD "Fistful of Voodoo' is now available and you can score your copy by emailing us at our address below or hitting the BUY NOW and pay with credit card via Pay Pal. For all bookings and inquiries you can contact Ricki at hillbillylover@gmail.com Get your Kreep on coz we gunna kick your ass!!

Balls to the wall rockabilly