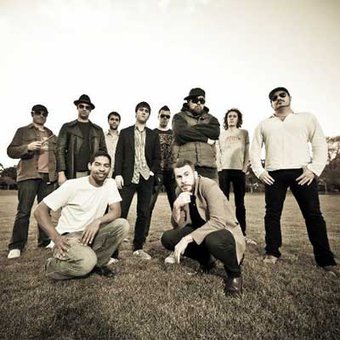 When musicians are curious about the sonic vocabularies of other cultures, yet have enough trust in their own instincts, then you will get the kind of ecstatic explosion of styles found in Bataucada Sound Machine.

After receiving rave reviews at WOMAD, Sziget Festival, Horizonte Festival, Sfinks Festival, Festival Nuits du Sud and other major festivals in 2010, 2011, 2012, and 2013, Batucada Sound Machine will return to Europe in 2014 to further their European reach with the release of their third studio album and a massive touring schedule.

The one overriding thing that united them was a deep passion for music. It still is.

As the years have gone by BSM has continued to evolve with various expansions and contractions. Their tasty concoction of Brazilian, Cuban and Afro-beat rhythms was given a hip-hop front in 2006 courtesy of MC Hazaduz, (of Che-Fu and the Krates fame) whose solid rhymes over the massive samba-reggae percussion add to the band's rich Pacific soul, reggae and funk flavours!

With influences from bands such as Ozomatli, Manu Chao and Chico Science, BSM have developed a solid reputation for delivering blistering live performances, fine musicianship and collective impulsiveness - the soulful vocals and super-tight horn section layer the Latin infused rhythms and wall-of-sound percussion, creating an intensity that has left crowds throughout NZ, Australia and the UK begging for more. The rising popularity and festive nature of BSM has also resulted in the band making the bill at numerous well-respected events alongside global heavyweights such as Damien Marley, Michael Franti and The Cat Empire.

After years of dutifully perfecting their live performances (plus the successful release of their EP ‘Live at The Bowl of Brooklands') finally the time was right to record their debut studio album. After meeting producer Neil Sparkes (Transglobal Underground / Temple of Sound) at WOMAD UK, an immediate friendship was struck and arrangements were put in place for Neil to come out to NZ to produce the album - with a plan to mix and master it in New York. All came to fruition, and at last Rhythm & Rhyme was conceived!

Mixed by Lawrence Manchester at the legendary Avatar Studios in New York, each track is thoughtfully sculpted and delivered with detailed precision, showcasing the bands enormous range and great passion for their craft. With a guest appearance by Che-Fu, the album swings from pure dance-floor afro-beat to funk, hip-hop, and deep samba-reggae which when combined, could be straight out of Brazil. BSM are very proud of their debut album and with offers pending in the US and UK, the future is stacking up well! 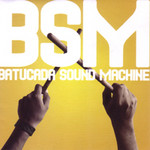