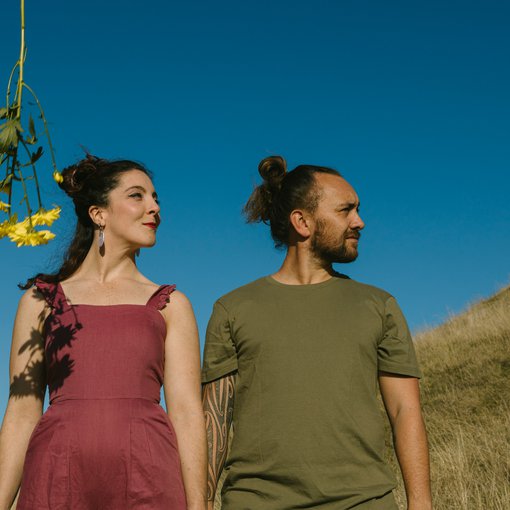 Aro consists of husband and wife Charles (Ngapuhi, Te Rarawa, Ngati Te Ata, Te Ari Awamutu) and Emily Looker. The pair share a passion for the power of language and music to tell stories and remind us of out cultural identity.

The duo were finalists for the Maioha Award at the Silver Scrolls (2019) and the APRA Best Children's Song Award for their song Korimako (2020).

Aro have been performing nationwide in Aotearoa since 2017 when they were established after meeting while both studying Music at Auckland University. The pair have completed three nationwide yours, and played to thousands at numerous festivals including Auckland Arts Festivals, Wellington Gardens Magic, Auckland Folk Festival, Festival One, OIkura Forest Festival, Waiting Day Festival (Paeroa), Kauri Carnival, Flava Urban Beats and Music in Parks with several more lined up for 2021-2022. They have also been featured on RNZ, have been consistently broadcast on Maori Television, and have been featured on and performed on radio & TV stations across the country. Consistently growing their audience over the past few years, the pair have reached 200,000 streams over they waiata on Spotify, and have released several music videos which have been broadcast nationwide.

As the band have a strong focus on tamariki and encouraging young people to be proud of who they are and their unique identities, in 2018, Aro developed an education programme delivering workshops, informed by matauranga Maori of our natural environment in Aotearoa New Zealand, to schools and Kura Kaupapa Maori. They have taken this resource to communities around Aotearoa with their past projects, and will continue to build on this with 'He Wai', visiting coastal communities in particular in 2021. Feedback from the past workshops was immense and overwhelmingly positive, resulting in the 2020 & 2021 education programmes growing year on year and taking place with the support of Creative NZ in 2020 and the NZ Music Commission in 2021. Aro aim to keep building on this success, and to increase the number of schools & Kurt kappa Maori Visited in 2022 threefold.