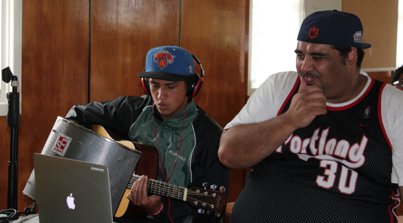 APRA Maioha award winning songwriter Tyna Keelan (Ngati Porou) has been mentoring in schools for almost a decade with our Programme.

Born in Tolaga Bay on the East Cape and based in Wellington, Tyna is known for his versatility as a producer, singer, MC and guitarist working with artists from all genres, on some of New Zealand's most successful records. He has collaborated with artists like Scribe and Pieter T, as well as performed extensively overseas. He has recently focused his passion for mentoring in a role as a youth worker.

"Tyna is an amazing guy - so approachable and so generous with sharing his talents. He is able to relate to everyone and has such a huge amount of talent and musical and technical knowledge. I would highly recommend him for any future projects."