The long awaited, multi layered release, 'The Raven Project' is the result of more than two years work, is arranged in collaboration with legendary composer John Psathas and involves collaborations with more than fifty artists & musicians and contains music, video & poetry in English & Farsi. 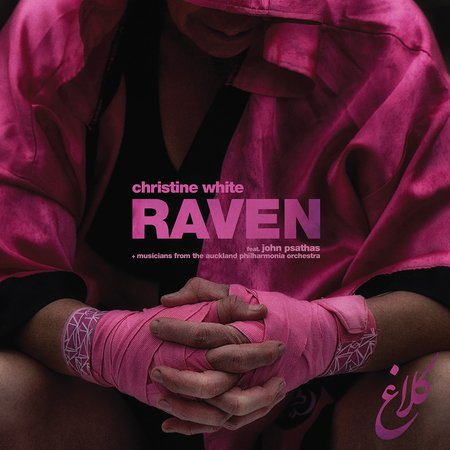 The Raven Project, from Christine White, began in March 2020 and is the result of more than two years work. The project release culminates with 6 songs in digital and vinyl format (including a remix by esteemed electronic producer Paddy Free), accompanied by 3 music videos, and a book of short haiku-style poetry book in two languages (English & Farsi). The final video to accompany the single 'Starless Rivers' will be released on Tuesday Dec 5th.

“The project is a reminder to me of a time of transformation, the kind that permeates your whole life. I hope some of the joy and struggle of that offers a glimpse to others of their own lives.
It has been a challenge and a world of learning on so many levels
– musical, cultural, linguistic,

collaborative - and as such has somewhat taken over my life. But I guess that is what Raven is about....the being you never thought you were, hovering, just beyond your reach”.

'Starless Rivers', The third single and final video clip (part three of a three part video series released over recent months), from this body of work, will be released alongside the full project release, and was written during the Covid lockdown in April 2020, the video release follows the audio on Tuesday Dec 5th.

The recording includes stellar playing by percussionist Vagelis Karapis (recorded in Greece), clarinetist Nick Walshe (from Wellington Vector Orchestra), The Little Bushman guitarist Joe Callwood and Wellington jazz drummer Lance Philip.
The co-arrangement (with John Psathas) features the smooth duet tones of White's voice and Walshe's clarinet, set against the triplet rhythms of a nylon guitar which lead into the lush and exquisitely placed Middle Eastern style string parts characteristic of Psathas. These then explode into a three part vocal mantra set against a cascade of strings and drums - a gushing river of sound that repeats the songs core theme - "no-one else can understand where you're going..."

Christine White’s musical life began with extended family sing-alongs, and moved through the grandiose, evocative and purposeful melodies of the pentacostal Baptist movement, before visiting the raw, smoke-filled, beer-smelling couches of gay/lesbian festivals, hometown pubs and city cafes of 1990s New Zealand. The harnessing of melody combined with a strong back-beat and the evocative twang of the electric guitar resulted in the Christine White band, an energetic three-piece that won the Gluepot Battle of the Bands and recorded both a single and never-to-be-released album at Revolver Studios, and gave a live to air performance through National Radio’s Helen Young Studio.

White has also recorded, performed and collaborated with many of New Zealand’s music elite, including Hinemoana Baker, Ariana Tikao and Mahina Kaui.

The solo recordings then followed and evolved.

Over the course of many years, incredibly talented and multi-faceted musician, Christine White, developed an appetite for non-traditional music-making. A subsequent degree in Sonic Arts Composition at Victoria University further brought about a shift in Christine’s approach where sound became a compositional tool. This also brought about the start of her incredible working relationship and friendship with composer John Psathas.

Christine’s long-time wish for a collaboration with Psathas began to take shape with the song Taken, as it was beautifully reimagined with its arrangement for voice & orchestra. Two further songs written in this early period of 2020 set the tone for the beginning of the two year creative expansion into record, videos and book.

Side A of Raven was recorded during 2020 in Auckland, Wellington and Greece. It boasted three drummers, two bass players, strings, French horns, harp, clarinet, percussion and later the kemanche, a stringed instrument from Iran. The three songs encapsulate different perspectives of life through the metaphor of birds – the experience of the caged, the lost and the free-falling/soaring.

Side B was written midway through the project, and utilised the original string recordings of 2020 in a completely new context. White remarks “The songs on Side B were built around the question, “What new material can be made from these beautiful recordings? What new perspectives can be given to the same subject matter?”

Another component of the project, the book, came about as a result of a self-appointed exercise where Christine decided to diarise her 2020 year in the form of short haiku-style poems – one a day throughout the year. This simple exercise became the documentation of quite a full year, both personally and globally.

The year also sparked a completely different change for White when, during the national lockdown, she embarked in the hugely stereotypical exercise of learning a second language. For a number of reasons, Farsi was the chosen language and after initially wondering if she would keep up this pursuit, the long dog walks became a Farsi word memorising exercise which then became daily conversations with women friends in Iran and throughout the world.

Realising that the music made during this time wasn’t to be separated from the circumstances surrounding it, Christine decided to incorporate the daily poems and Farsi language into the project. Again, with backing from Creative New Zealand, the book was added and a new version of Raven was added in Farsi, becoming a song called Kalaagh and featuring Auckland-based kemanche player, Rasoul Abbasi. The end result was built from the ground up, using the original string recordings in a completely new way.

The project is supported by Creative New Zealand and features players from the Auckland Philharmonia and Wellington Vector Orchestras as well as session players from the likes of The Little Bushman and the Chris Mason-Battley Group. It also includes a remix by electronic musician and producer Paddy Free.

Alongside the full project audio release on Nov 24th, is the physical release (vinyl & book) to follow on December 15th.

The Raven Project is available to preorder on Vinyl via Bandcamp