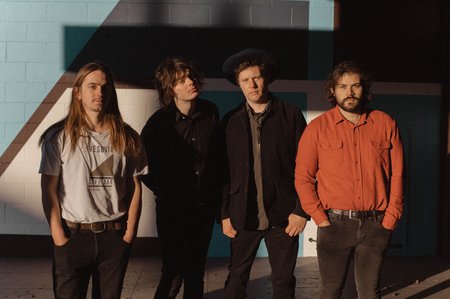 Listen to Rooster Here
Order Rooster Here
Where Woolston, Texas shone light on the shadows, ‘Rooster’ invites them in to break bread.
As Adam Hattaway and the Haunters’ (A.H.) fourth studio release and first double album, it is laden with a certain humility that demonstrates Hattaway’s burgeoning maturity as a singer/songwriter. By following a more organic process to producing the album, A.H. has captured the enigmatic allure that defines their live shows.
The natural follow on from the nostalgia of ‘Woolston, Texas’ - ‘Rooster’ is a hopeful, sprawling ode to possibility.
And after the forced pauses through 2020, A.H. felt pressed to release a build-up of creative energy while embracing more of the fervor and improvisational
elements of a live performance.
In February 2021, just out of Kurow, Sublime Studios became the inner sanctum where Hattaway and Jones led the charge through four intense days of writing, rewriting, and recording.  Live, the band stretch out and improvise more, especially vocally as Adam hadn’t been able to bring that spontaneity to the recording studio before - until now.
In true 60s style, the album was recorded to 4 track tape and co-produced by Hattaway and Jones on the fly. The resulting ‘Rooster’ emerged as what Hattaway describes as
“a rough and rowdy double album”. There is an air of transience to the album. With many songs on the album being shown to Hattaway in dreams, it holds the feeling of getting moving again after a long time in one place.
The album cover features art drawn in the 1930s by Adam’s great, great uncle, Rolfe, who spent most of his adult life in psychiatric wards. Due to the stigma surrounding his condition, he was largely removed from family history until recent times. His work has been posthumously celebrated in New Zealand art galleries. Hattaway remarks
“this drawing we thought really fit with the vibe of the record, and of course we were glad to be able to contribute in a small way to keep his memory alive.”
In celebration of their release, A.H are embarking on a 12-date (and level two friendly) National tour.
November 26 - Christchurch - Space Academy with Anthea De Milo
November 27 - Barrytown - Barrytown Hall with Al Park
December 01 - Wellington - San Fran
December 03 - Whanganui - Whanganui Musicians Club
December 04 - Hastings - Space Ship with Danica Bryant
January 02 - Nelson - The Space At The Free House
January 04 - Mapua - The Golden Bear
January 07 - Akaroa - The Grand
January 27 - Auckland - Wine Cellar with Kendall Elise
January 28 - Raglan - YOT Club with Mini Simmons
January 29 - Kūaotunu - Lukes Kitchen with Mini Simmons
January 30 - Leigh - Leigh Sawmill with Mini Simmons
Tickets at Under The Radar
Buy Tickets Here
ADAM HATTAWAY AND THE HAUNTERS
Listen: Spotify / Apple Music / Bandcamp
Follow: Facebook / Instagram / Youtube